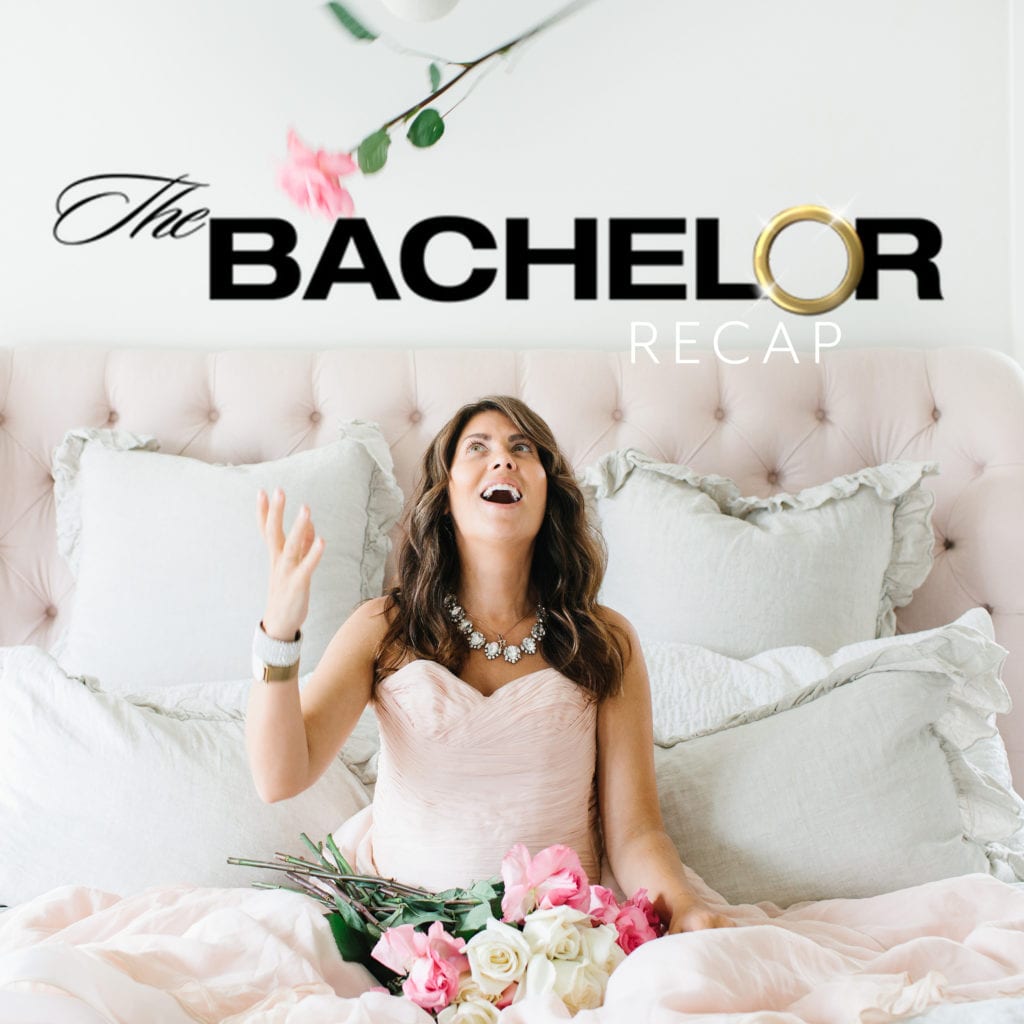 This week’s episode kicks off with the rose ceremony for Peter’s final three ladies… except Madison isn’t there?! I totally thought this was the beginning of Peter chasing after Madison and saying his goodbyes to the other women! But low and behold, she arrived! Victoria says, “she’s here” when Madison shows up and I think it’s safe to say that she was less than impressed! LOL!

Peter was struggling to get through this rose ceremony even though I feel like it was a no brainer who he was going to send home? Am I right? It was time for Victoria to pack her bags! Hannah Ann happily accepted a rose and Madison, not so much??? She seemed very reluctant. I don’t think “yeah” is a very comforting response to “will you accept this rose?” LOL!

Victoria didn’t seem overly upset about being sent home?? Considering how dramatic she’s been all season, her goodbye was kinda the opposite! “It is what is it” doesn’t really scream heartbreak to me! LOL! I can guarantee this is not the last of the Victoria drama and we will be seeing her on a beach in Paradise? Who else agrees with that?!

Let’s bring out the ladies!!!

Did anyone else notice right away that Kelley was MIA? I’ve always been a huge Kelley fan so I’m very curious where she was and maaaaybe this could mean we will see her again in the finale?! Wishful thinking! LOL!

Chris Harrison starts off by asking the ladies what they think of Madison and her “ultimatum” that she gave Peter?! Sydney shares that her and Madison are from the same place and that’s how they were raised, and she totally respects Madison for speaking her truth and sticking to her values and I definitely agree with that! I think it would be really hard to get on board with knowing your potential fiancé slept with someone a week before, regardless of your religious views?! Sean Lowe posted a photo after the fantasy suite episode of Catherine and their 3 kids that was captioned “This is what happens when you forgo the fantasy suite and wait until marriage”, so cuuuute! Maybe waiting until marriage pays off! 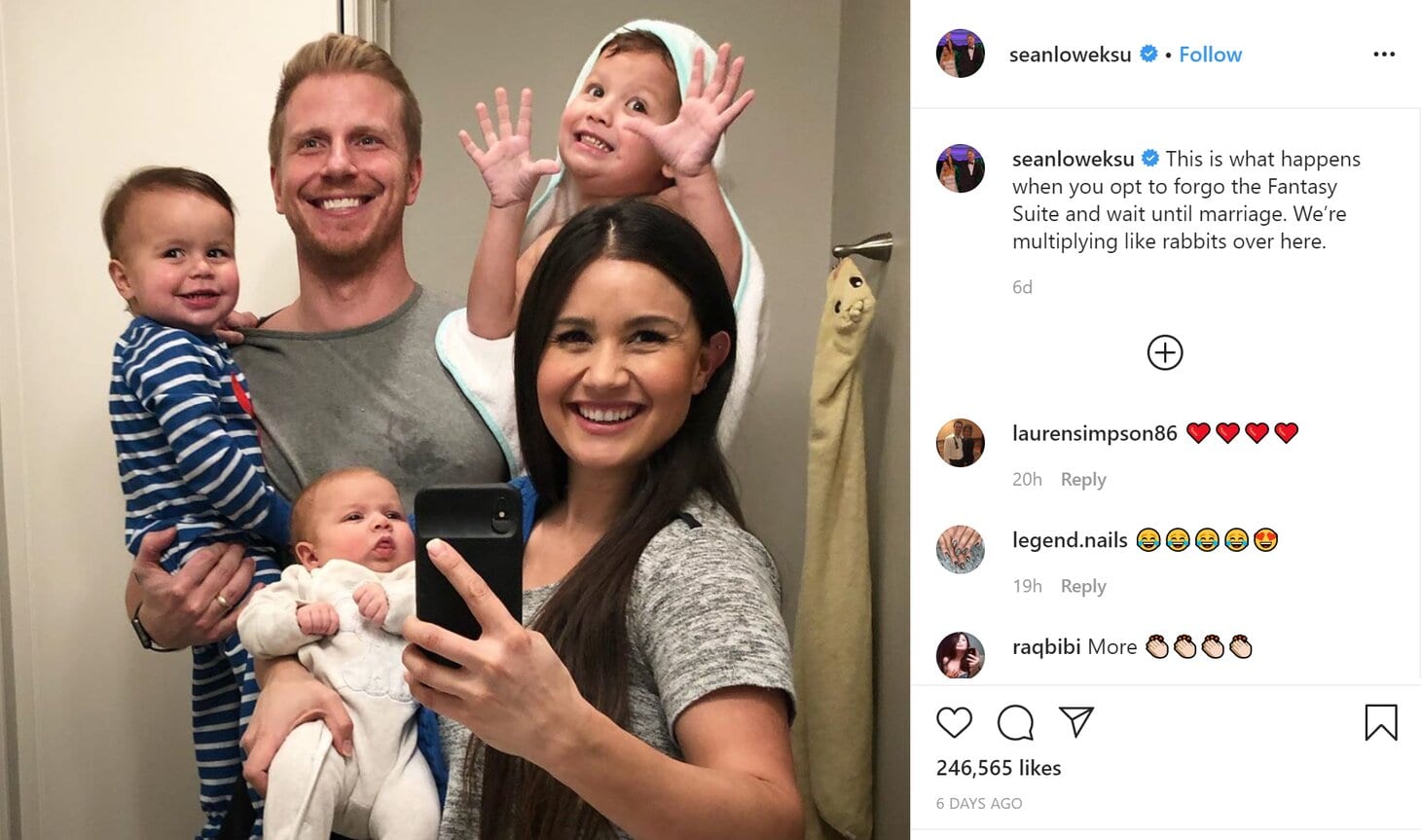 At one-point things got VERY heated between all the women. It started with the girls coming after Alayah for being fake and calculated, then it was a chain of attacking each other, from Victoria. P to
Sydney to Tammy… it was just utter chaos! Chris Harrison let the ladies go at it until he had to call a timeout and cut to commercial!

Mykenna and Tammy also had a screaming matching and eventually, Chris Harrison asked MyKenna if she would like the final say, which she replied that she’d like to take Tammy back to Canada to teach her how to be kind and polite to people… amen, sister! 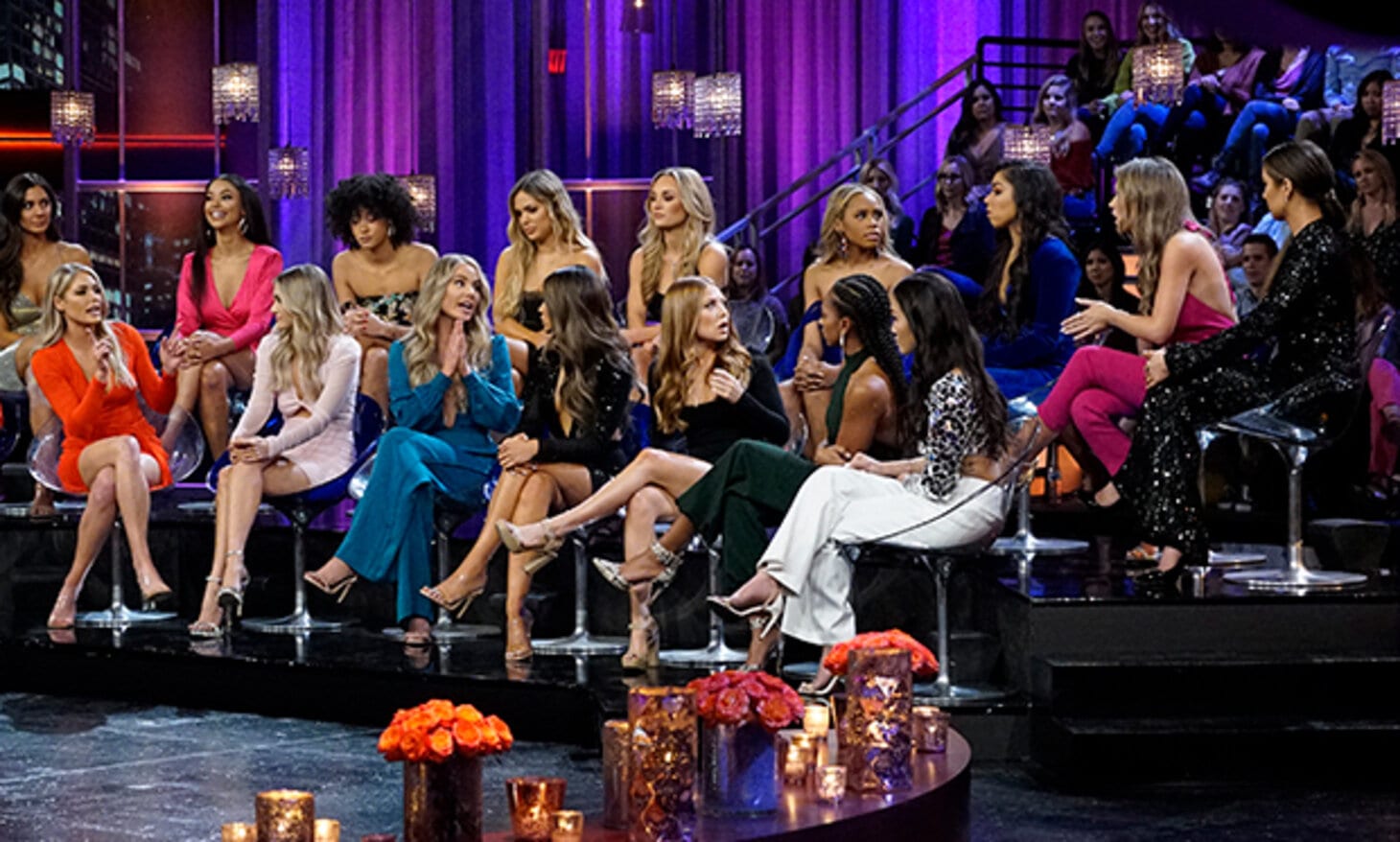 Kelsey is first up in the hot seat! I really thought that Kelsey would be in the running for Bachelorette based on how well-liked she became towards the end of the season? Speaking of which, the new Bachelorette, Clare Crawly was announced and I’m so shocked??? I always find it very strange when they pick past contestants that are kind of irrelevant in the Bachelor World… Like when they randomly made Arie The Bachelor? I remember thinking who is this guy??? I’m excited to see an older and maybe wiser Bachelorette! Maybe we’ll see a silver fox or two in the next group of men! LOL!

But back to Kelsey! We all knew that Kelsey was not going to be able to avoid a conversation about “Champagne-Gate” – and Chris Harrison made sure to not let this go! Kelsey fully admitted that she overreacted but defends herself for being a very emotional person and that there’s nothing wrong with that! Ashley Iaconnetti appears to present Kelsey with a massive bottle of champagne so that she won’t ever lose it or so that no one will “steal” it on her! LOL! Ashley applauds Kelsey for representing all the emotional ladies this season and said there is no room for emotional shaming… which got a biggggg eye roll from Tammy! 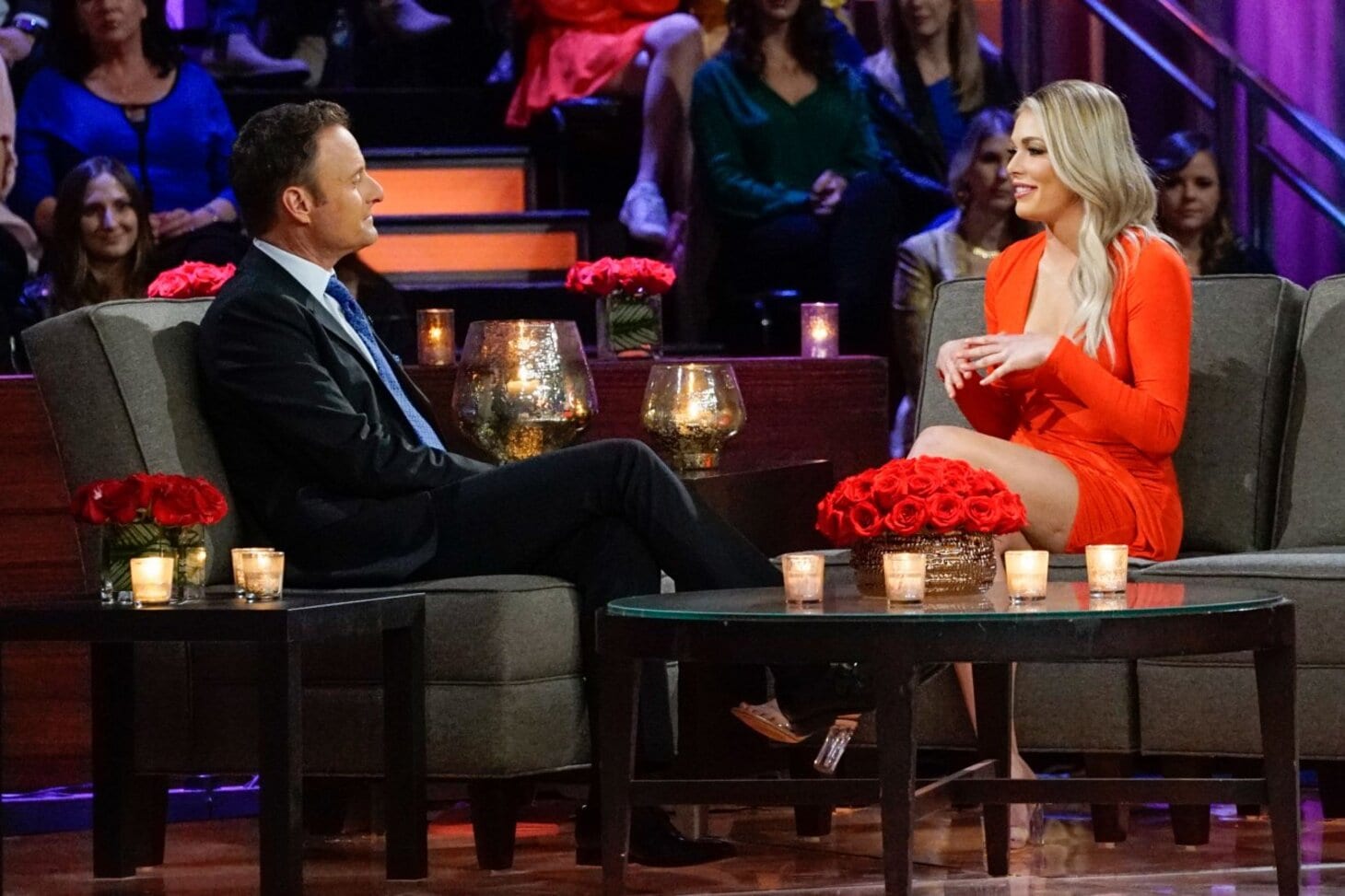 Victoria is up next and my feelings about her have definitely flip-flopped over the course of this season! I loved her in the beginning, then she annoyed the CRAP out of me, and then finally watching her talk about the season I really enjoyed her again! Did anyone else feel the same?! I really appreciated how she took full accountability for how she acted while she was on the show and said to Peter “I put you through hell”, and she’s not wrong about that! LOL. Chris Harrison puts her on the spot and asks her on national television if the rumours are true as to whether or not she’s broken up marriages… I meannnn, I think it’s safe to say she’s going to deny those accusations! 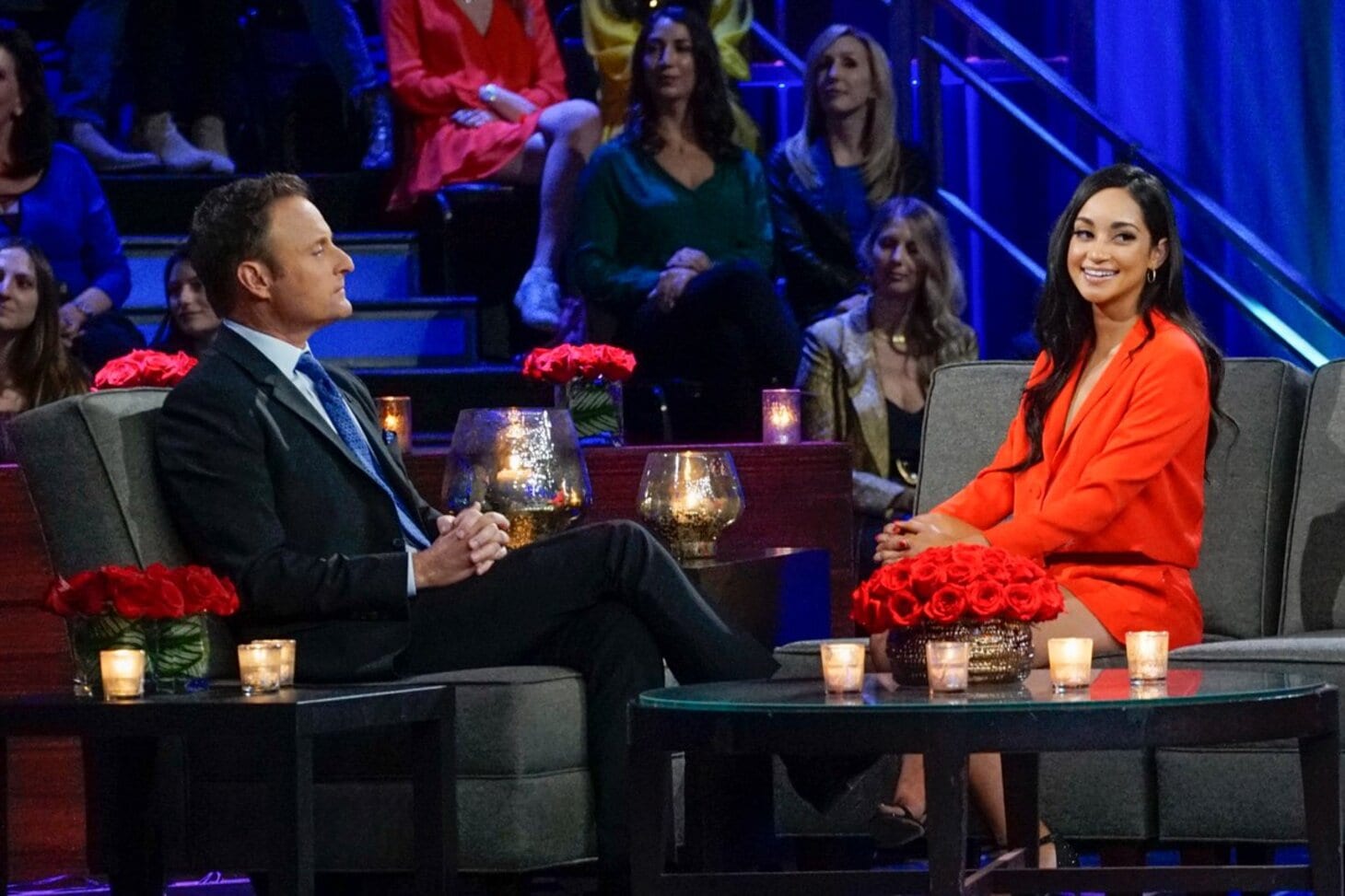 Finally, it’s Peter’s turn in the hot seat and it wasn’t as dramatic as I was anticipating! Peter got some heat about “rewarding the drama” which was to be expected because that was basically the ongoing theme of the season! LOL! However, Peter stood by his decisions and said that he was following his heart and has no regrets!

Kelsey shared with Peter how she’s thankful for their relationship and that dating him made her realize what she wants in a partner and what she deserves! Peter definitely has a soft spot for Kelsey in more of a friendship type of way, but he agreed that what they shared was special and they connected deeply on an emotional level…. LOL which is very fitting for the most emotional girl on this season.

Victoria F thanked Peter for being so patient with their relationship and it was funny to see her acknowledge what a total nutbar she was all season and Peter was definitely not disagreeing with that! Peter got all cute and said a phrase about how “love is patient” and it was pretty darn sweet! 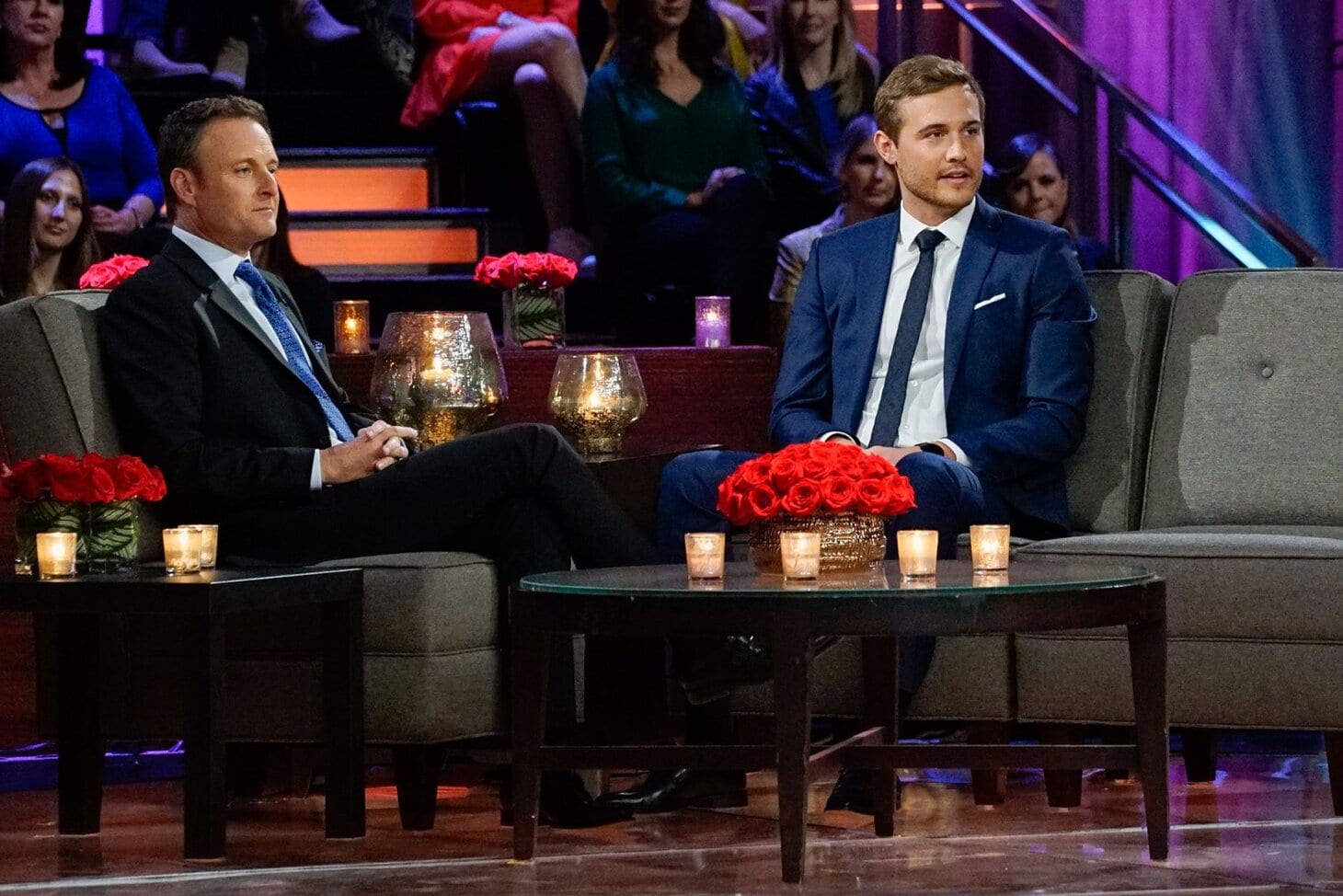 The episode concluded with an appearance from former Bachelorette Rachael Lindsay who was raising awareness for online bullying and the impact it has on the lives of REAL people. I think that’s what these online “trolls” forget – because they’re watching these people on television, it makes them less human? Some of the comments and dm’s that were shared about the women were quite frightening and it’s sad that people think it’s ok to hide behind a phone or computer and attack someone based on their appearance or upbringing. It was very alarming to see that each and every woman from this season has received some form of hate over social media.

The episode ended with a preview of the FINALE! We see the clip again of Peter’s mom telling him to “bring her home” – I guess we will finally find out who she is next week! My money is on Madison!! How about you guys??

Also, I would love to know what you guys think of the new bachelorette, Clare Crawley? 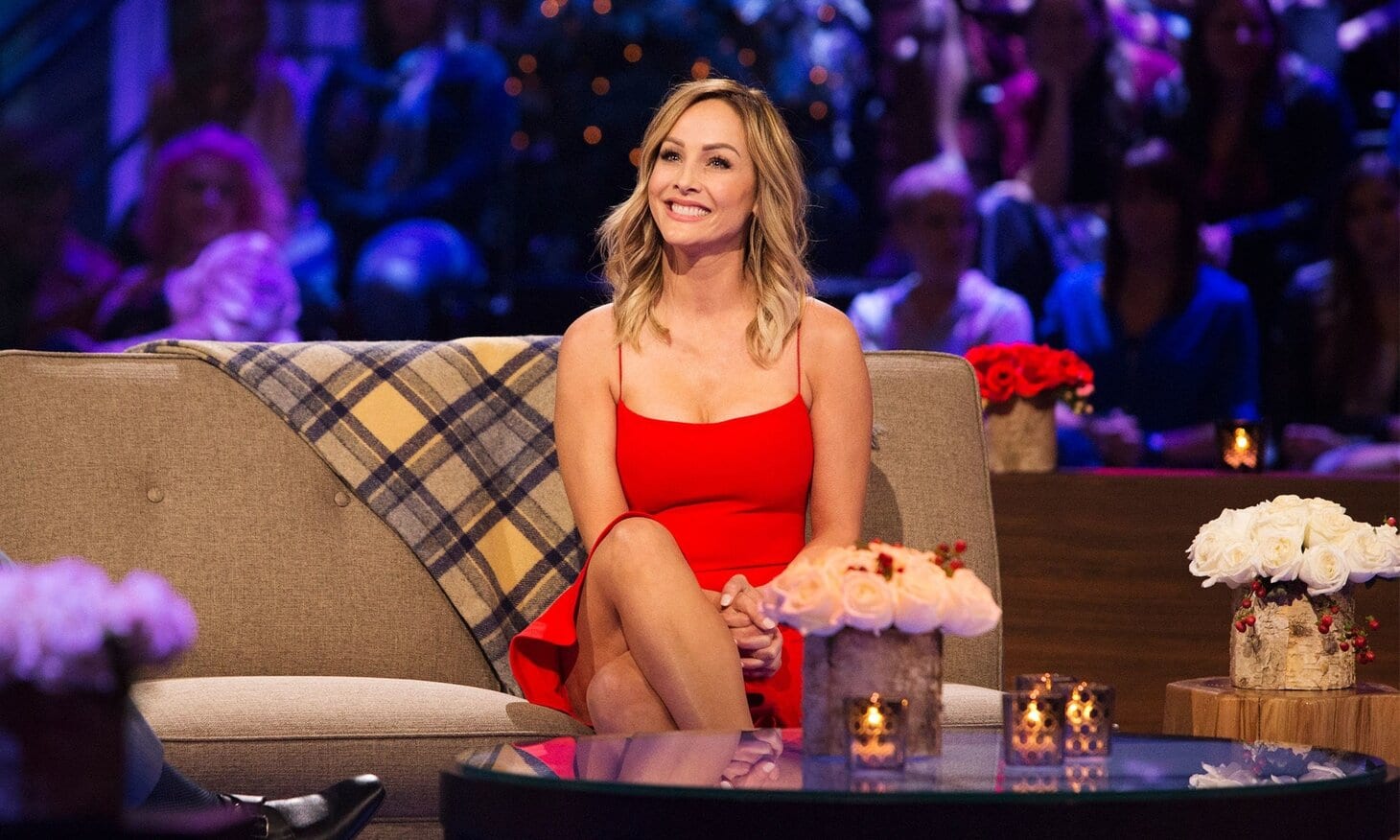