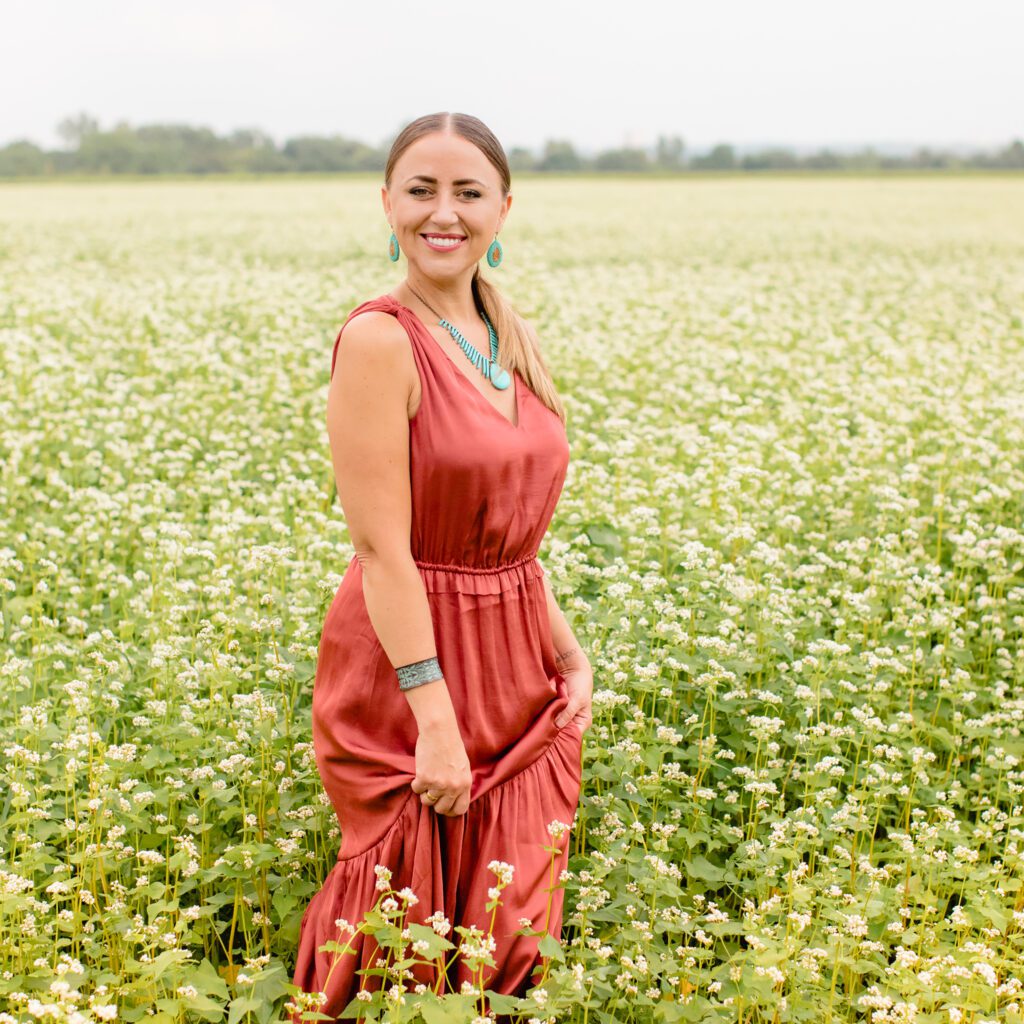 I’ll let her take it away!

Tanshi, my name is Fallon Farinacci and my spirit name is White Thunder Woman. I am a proud Red River Métis. My husband Lucas and I are parents to three children, Carmine, Ever, and our wild & free little man, Vedder. I am a speaker, writer, and a child survivor and advocate for Missing and Murdered Indigenous Women, Girls, and 2SLGBTQQIA (MMIWG2S+) peoples.

I was born and raised in the beautiful prairies in a tiny Métis community, St.Eustache, Manitoba. My family’s roots are woven through this community. When I was a young girl, my father was the President of the Southwest Manitoba Métis Federation, instilling in me at a young age to be proud of my heritage.

At the age of nine, my world came to a crashing halt. A family friend became obsessed with my mother. After numerous complaints and several errors within the justice system, my family and I were held hostage by my mother’s stalker. Fortunately, my older brother (Carson, 17) escaped. Sadly it took six hours for the RCMP to rescue my younger brother (Clinton) and me. At that point, it was too late for my father (Maurice) and mother (Sherry); the gunman killed my parents and himself.

Unfortunately, my brothers and I were displaced from our community. We found ourselves living in Ontario, far away from both the lands we grew up on and our culture. Neither my brothers nor I received proper post-traumatic care; this would later affect my older brother gravely when at the age of 29, he committed suicide, shattering my heart and leaving behind my younger brother and me. Instead of sitting in the grief and pain, I chose to lean into my story.

In October of 2017, my journey with advocacy began. I testified for the National Inquiry for (MMIWG2S+), sharing my story with the hopes of bringing awareness and change. Later, in January of 2019, I embarked on a healing journey of reclaiming my heritage. I was asked by Commissioner Michèle Audette from the National Inquiry if I would join The National Family Advisor Circle (NFAC) along this journey. I had the honour of journeying with fellow MMIWG family members and survivors throughout the Inquiry. In June of 2019, we, the families, survivors, and commissioners, presented both the nation and the Prime Minister the Final Report and the 231 Calls for Justice.

A significant part of my healing journey has been the reclamation of my culture and what it means to me to be Métis. I recently realized my reclamation journey isn’t just for or about me; it’s for my children, their children, and our family’s future generations. Reclaiming my Métis culture is a way for me to connect to my ancestors and to continue my father’s legacy as a strong and proud Métis, inspiring future generations to be proud to be Indigenous.

While my story is tragic, I tell people that my story doesn’t make me who I am. My ancestor’s resilience is what makes me the person I am.

On September 16th, I will officially surpass my father’s age when he died, making me the oldest surviving family member and the first person in my family to turn 38 years old. Instead of sitting in the heavy sadness and grief that comes with that day, I chose to shift the narrative and celebrate the fact that I AM STILL HERE!

I set a goal to raise $114,000! Why $114,000? Because I want to raise $38,000 three times to represent each of my family members who passed away before their 38th birthday, I can’t think of a better way to honour their lives. Both the organizations will benefit immensely from receiving this level of funding.

Let’s shift the narrative of the pain & grief that September 16th holds and celebrate the fact that I am still here! Join me in celebrating Indigenous Resilience!