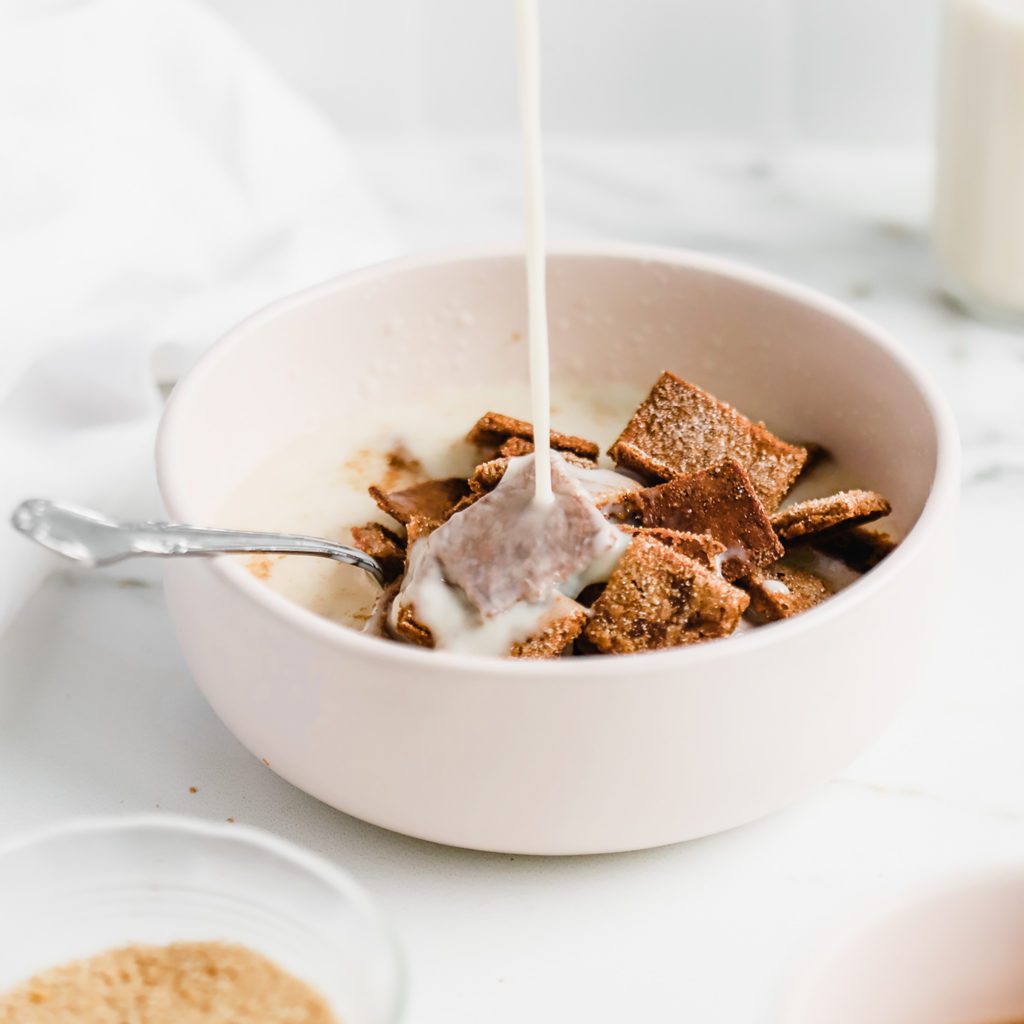 This homemade Cinnamon Toast Crunch tastes just like the real thing, but is vegan and gluten-free! It’s a nostalgic breakfast treat that will make you feel like a kid again!

Hi everyone, it’s Bailey here again from Basics With Bails! I’m back with another fun vegan recipe! This time I wanted to recreate Cinnamon Toast Crunch Cereal.

You know what they say, breakfast is the most important meal of the day, right? So why not make it special and different? I typically like keeping it simple with a Green Smoothie, Superfood Protein Breakfast Cookies, or some Banana Bread Granola. But sometimes I like to switch it up and have some homemade cereal with fresh fruit!

I love cereal, but I haven’t bought boxed cereal in I don’t know how long. One day I was craving Cinnamon Toast Crunch and decided, WHY NOT whip some up?!

Homemade cereal… I already see your brains shutting down because you ain’t got time to make your own cereal, and you think this will be WAY too hard. However, there are only 8 ingredients for this entire recipe. EIGHT.

All you just have to do is mix them, roll ‘em and then cut them into cute little squares. In my opinion, the only tricky part is rolling the dough out. You want it thin enough so the Cinnamon Toast gets crunchy, but not too thin that the dough breaks. It’s a fine line, but if you can master this part you’re smooth sailing for everything else!

The absolute HARDEST part is waiting for them to cool, but you must! They continue to crisp up on the baking sheet as they cool, so if you’re looking for the perfect crispy cereal, you HAVE to wait.

Oat Flour (Can Blend Oats In Blender To Make Flour)

Flax seeds are a very key ingredient in this recipe! When combined with water, they create an egg-like binder that holds the cereal together! They are full of healthy fats and are a great vegan option for those who can’t have egg in baked goods!

Helpful Tips To Make Sure Your Cereal Gets Crunchy:

1. ROLL THE DOUGH OUT VERY THIN!

This is the most important part about this entire recipe! You want the dough to be approximately 1.5mm thick. The thinner you can get the dough, the crispier the cereal will be. Do not roll the dough so thin that the dough rips apart, but you still want it extremely thin.

I tested this recipe numerous times and I found out the hard way that these can burn very quickly. It only takes a minute for them to go from golden brown to burnt to a crisp!

3. LET THE CEREAL COOL OFF FOR AT LEAST AN HOUR.

This really lets it dry out and gives it that CRISP! Once it’s fully cooled and has crisped up you can devour it with non-dairy milk, or enjoy completely on it’s own as a crunchy snack!

If you LOVE this recipe, here are some other breakfast options you can test out!

I can’t wait to see your creations! Share your Cinnamon Toast Crunch remakes with Jillian and I by tagging @basicswithbails and @jillian.harris on Instagram!