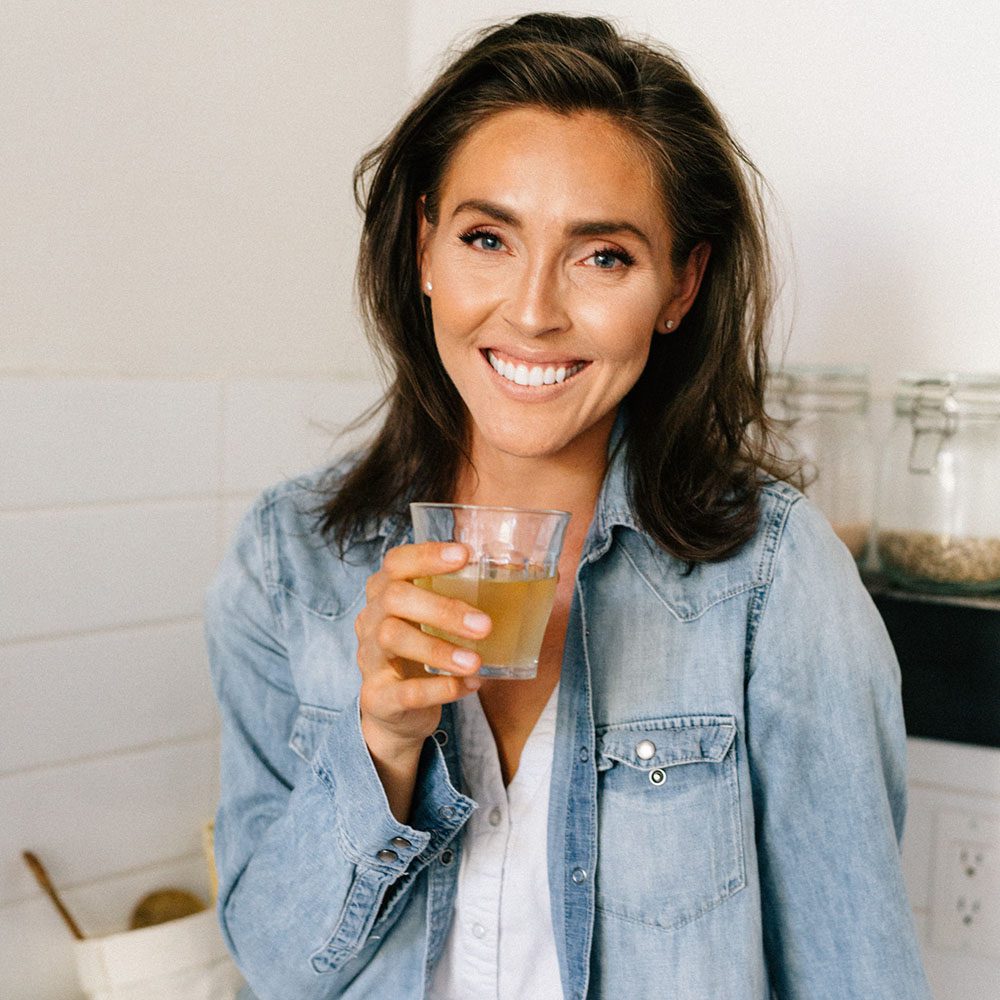 A Q&A with One of My Biggest Inspirations: Erin Ireland

Hi everyone! Today I’m sharing something really special with you, something that’s near and dear to my heart from someone who has been one of the main reasons why I’ve made so many lifestyle changes over the years. She’s certainly someone I look up to and I find her ridiculously inspiring!!

Today I wanted to do a little Q&A with Erin Ireland!! Many of you may already know (and follow!) Erin, but for those of you who don’t know who she is, I’ll give you a quick update!

Erin Ireland is the Editor of itstodiefor.ca, a site that aims to connect readers with the best vegan restaurants, recipes, and products in existence. and the owner of vegan bakery, To Die For.

Tell us a little bit about your journey – what inspired you to make the switch?

For the first 30 years of my life, I ate animal products. During my college volleyball years living in South Carolina, I even referred to myself proudly as a carnivore (despite considering myself an animal lover). I did sometimes think about the animals and what they had to go through in order to arrive at my plate, but since everyone I knew ate meat and the industry was so huge and inspected by governing bodies, I figured the system must be just. In my imagination, the animals “lived a decent life” and in the end “probably didn’t feel a thing”. Then, I watched a documentary called Earthlings and my worldview changed forever.

Earthlings shows how animals are treated in industries from pet breeding to farming. Joaquin Phoenix, who narrated the doc, said, “Of all the films I have ever made, this is the one that gets people talking the most.” (Here’s a YouTube link to the free documentary, if you’re interested.) I realized that industries and government can’t be trusted to make sure animals are treated well.

It’s up to us, as citizens and consumers, to become aware and to participate in creating change. Similar to so many of you, I can barely watch slaughterhouse footage. My impulse is to shut my eyes when I see anything resembling animal cruelty. But watching Earthlings, I kept telling myself, “seeing this is a million times easier than what the animals are going through.” (To be
honest, I shut my eyes for most of it, but its message was received). Finally learning the truth motivated me to live in alignment with my animal-loving, peaceful values. I’ve found that nothing tastes as good as being vegan feels. 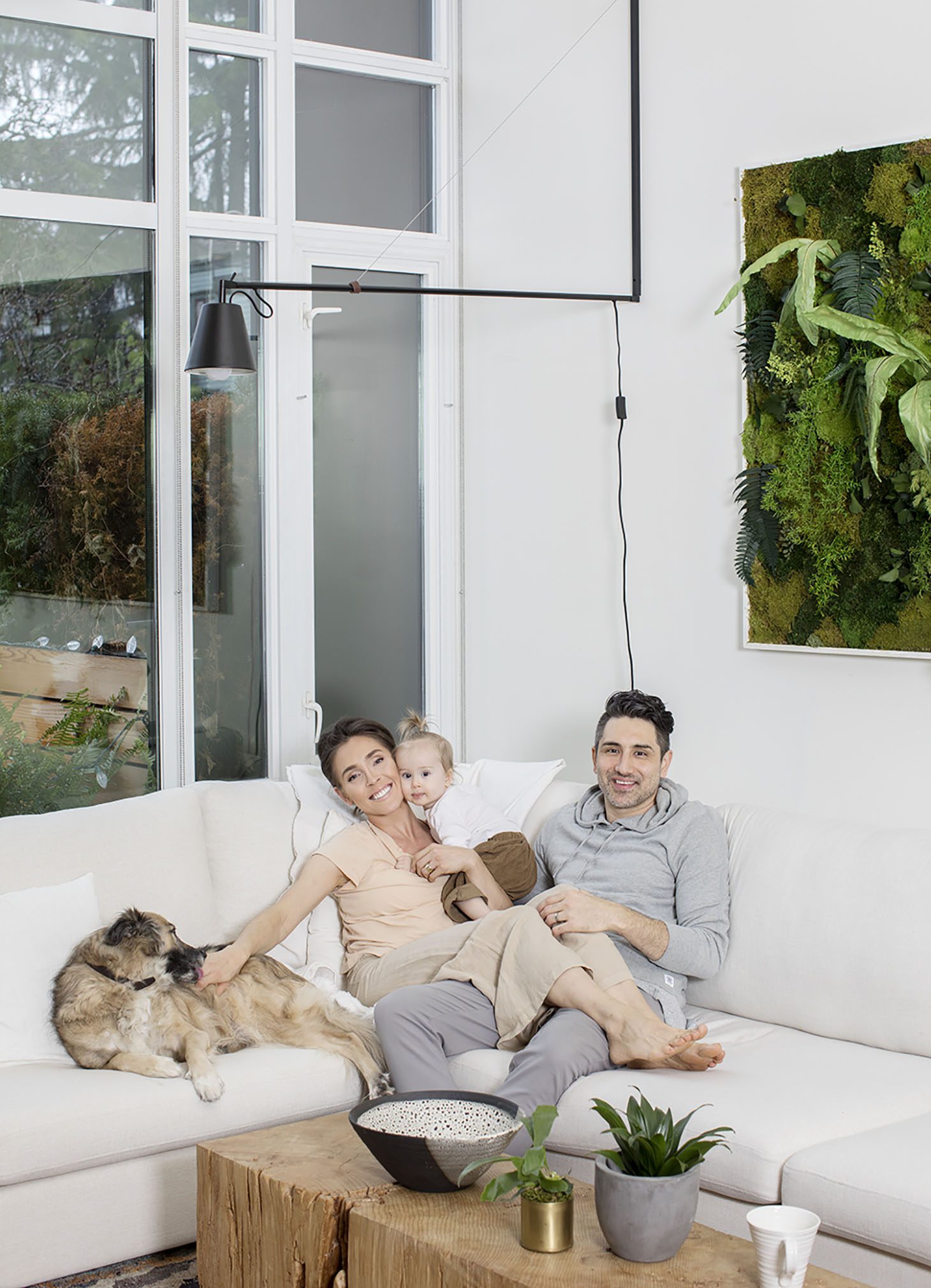 What have been your biggest hurdles?

Earthlings is what really opened my eyes, but before then, I think on some level I knew that once I dove into learning about animal farming, I wouldn’t like what I found. So, over a period of a few years, I had already been making gradual changes to my diet and habits. By the time I watched Earthlings, I just needed a little push… becoming totally vegan and an animal advocate
was easy. Learning new habits can take time, but don’t let that stop you from taking the first steps!

A hurdle for some who are transitioning can be social situations surrounding food (dinner parties, work events, family gatherings, etc). What I’ve learned is that communicating openly and in advance helps to minimize negative reactions from non-vegan friends, colleagues, and family. When it feels appropriate, I’ll offer to bring a dish to share, make restaurants suggestions, or contribute in some other way. Then, after telling people about my dietary choices, I purposely don’t bring it up again unless asked. I feel like this approach has led to many of my friends and family showing curiosity towards the plant-based lifestyle and asking about meal ideas and plant-based ingredient substitutions.

When people invite us over for dinner, they’re excited to show us the vegan meals they’ve created! I think one of the hardest parts of being vegan is knowing what animals are going through in the meat, dairy and egg industry and not being able to stop it. It can feel frustrating to realize that plant-based eating can actually be really delicious and satisfying (not to mention health- promoting) then having to wait for the world to catch on! Plant-based diets could solve so many global issues from climate change to animal cruelty to rampant lifestyle diseases, and I wish I could help everyone to see this. But I know that if I could go from self-described carnivore to plant-obsessed animal advocate, anyone can! 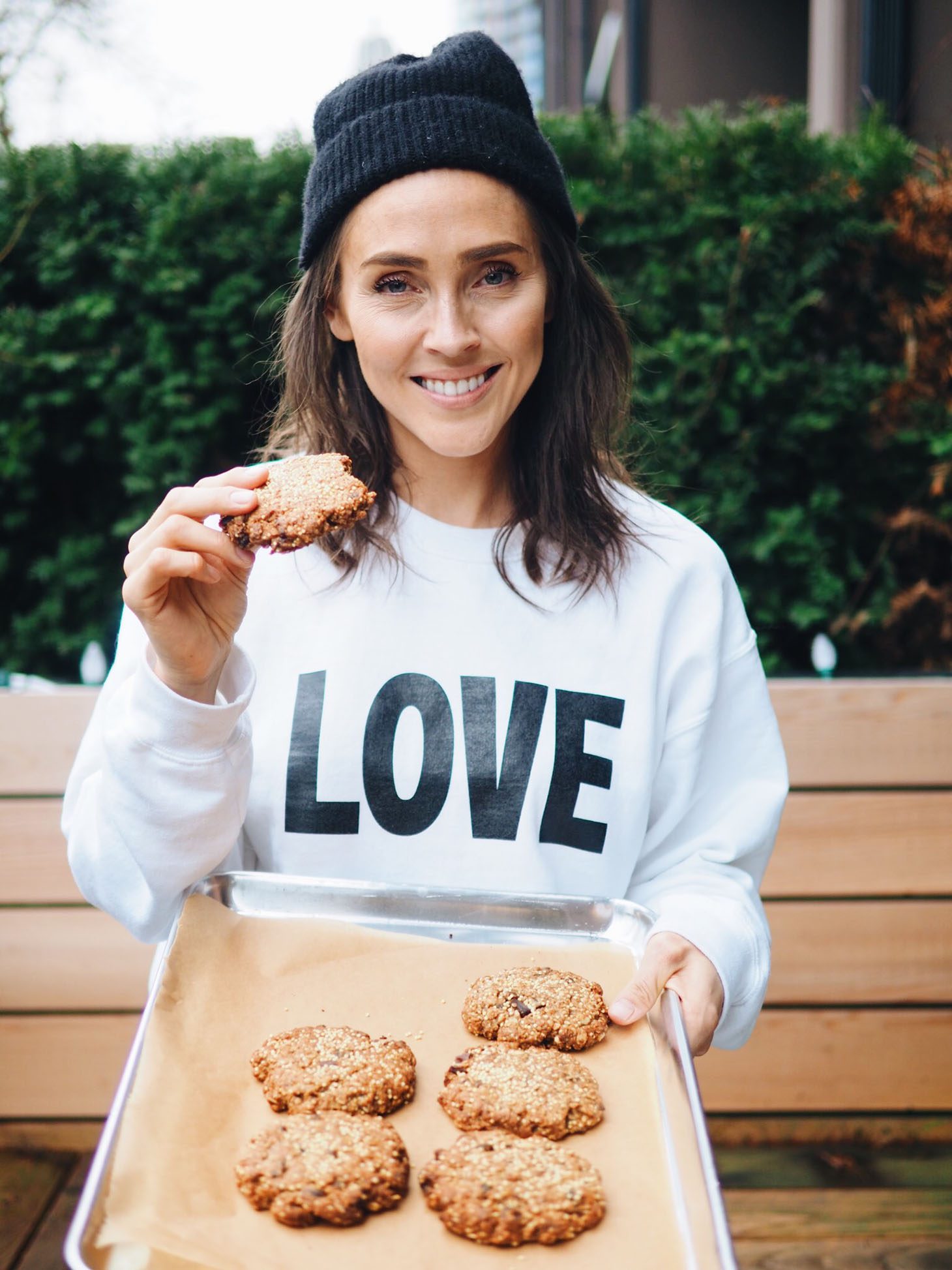 What have you found to be the easiest switch? And how can our viewers start tomorrow?

Fortunately, we’re living in a day and age where the vast majority of grocery stores out there have decent vegan products. And if they don’t, virtually everyone has access to age-old plant-based staples, like grains, beans, bread, peanut butter, hummus, tofu, vegetables… the list goes on!

As for the foods that were easiest to swap for animal-free versions, I’d say milk, ice cream, butter, and cheese. Plant-based milks have taken over dairy cases and are driving the dairy industry out of business. Luna and Larry’s Coconut Bliss ice creams are widely available and they’re amazingly creamy and delicious!

Locally in Vancouver, I’m obsessed with Umaluma Gelato. Their drunken cherry flavour is an all-time favourite of mine! When it comes to vegan butters, I’ve heard so many people say they find Earth Balance even more delicious than cow butter. It’s a no-brainer replacement, and also found at most grocery stores.

Lastly, cheese. If I did a blind taste test with dairy parmesan and VioLife parmesan (sold at Vegan Supply in Vancouver and Whole Foods in the States), I honestly don’t think I could tell the difference. It’s that amazing — and it grates well too! If you’re interested in my full list of dairy and meat alternatives, check out this post.

Substitutions aside, my best tip for going vegan is to focus on why you want to be vegan, as opposed to how you’re going to do it. By focusing on the animals, learning what happens to them, visiting sanctuaries and making the connection that they are here with us, not for us, you will be so unbelievably motivated to figure out how to go vegan, it will seem easy 😉 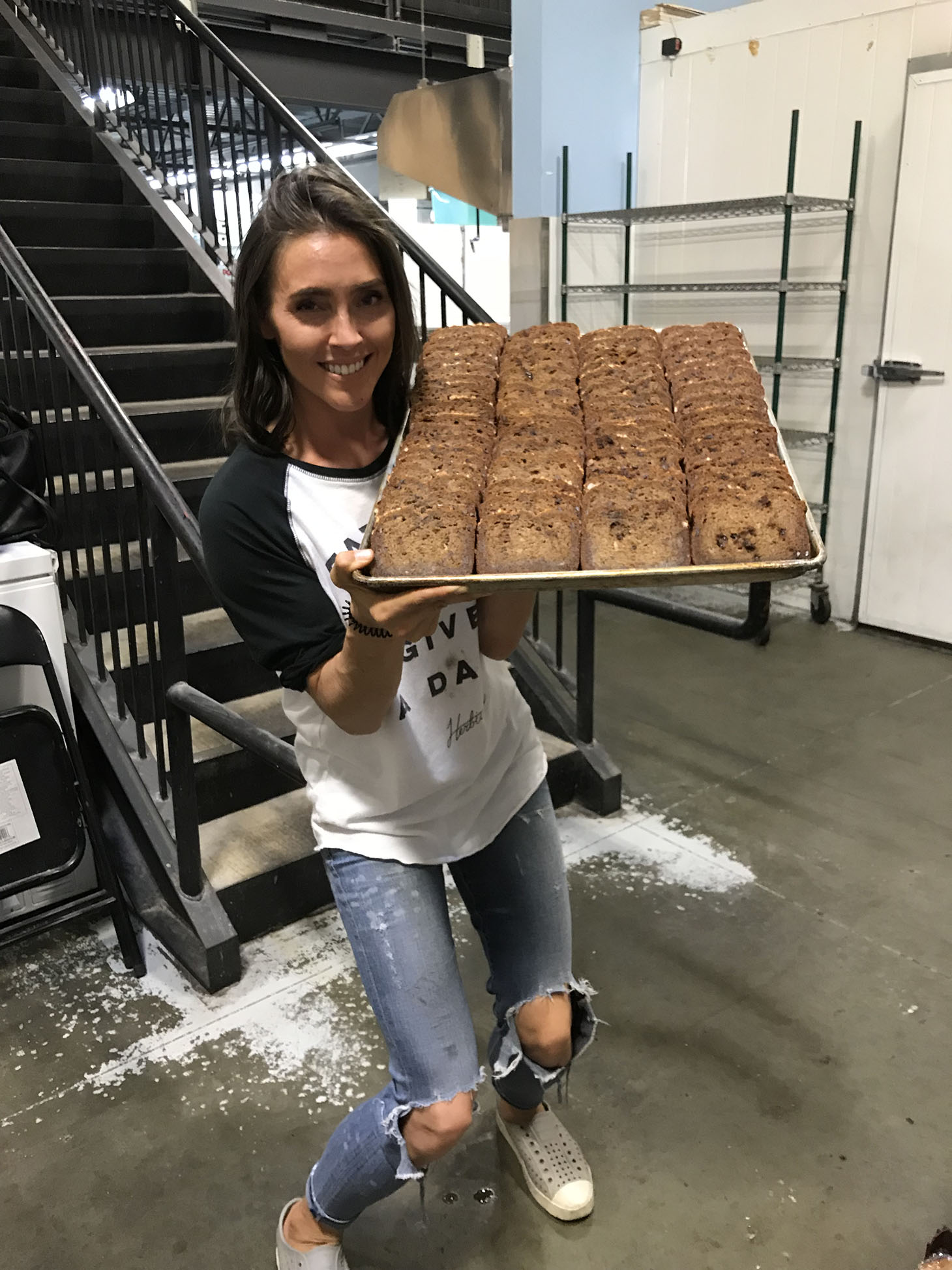 What made you decide to go from being vegetarian to vegan?

I’ve actually never thought of myself as a vegetarian. I pretty much went from hard-core meat eater, to ‘flexitarian’, to vegan. It’s hard to believe (and definitely not immediately apparent), but the dairy and egg industries are even crueler than the meat industry. For example, did you know that in the egg industry, male chicks serve no purpose (because they can’t lay eggs), so they’re ground up alive in a macerator the same day they’re born? That blew my mind. And, the females have a large portion of their beaks cut off with a burning hot blade without any painkillers. After two years laying eggs, hens’ fragile bodies are spent, can no longer produce enough, and are sent to the slaughterhouse. Scroll down for more about the dairy industry. 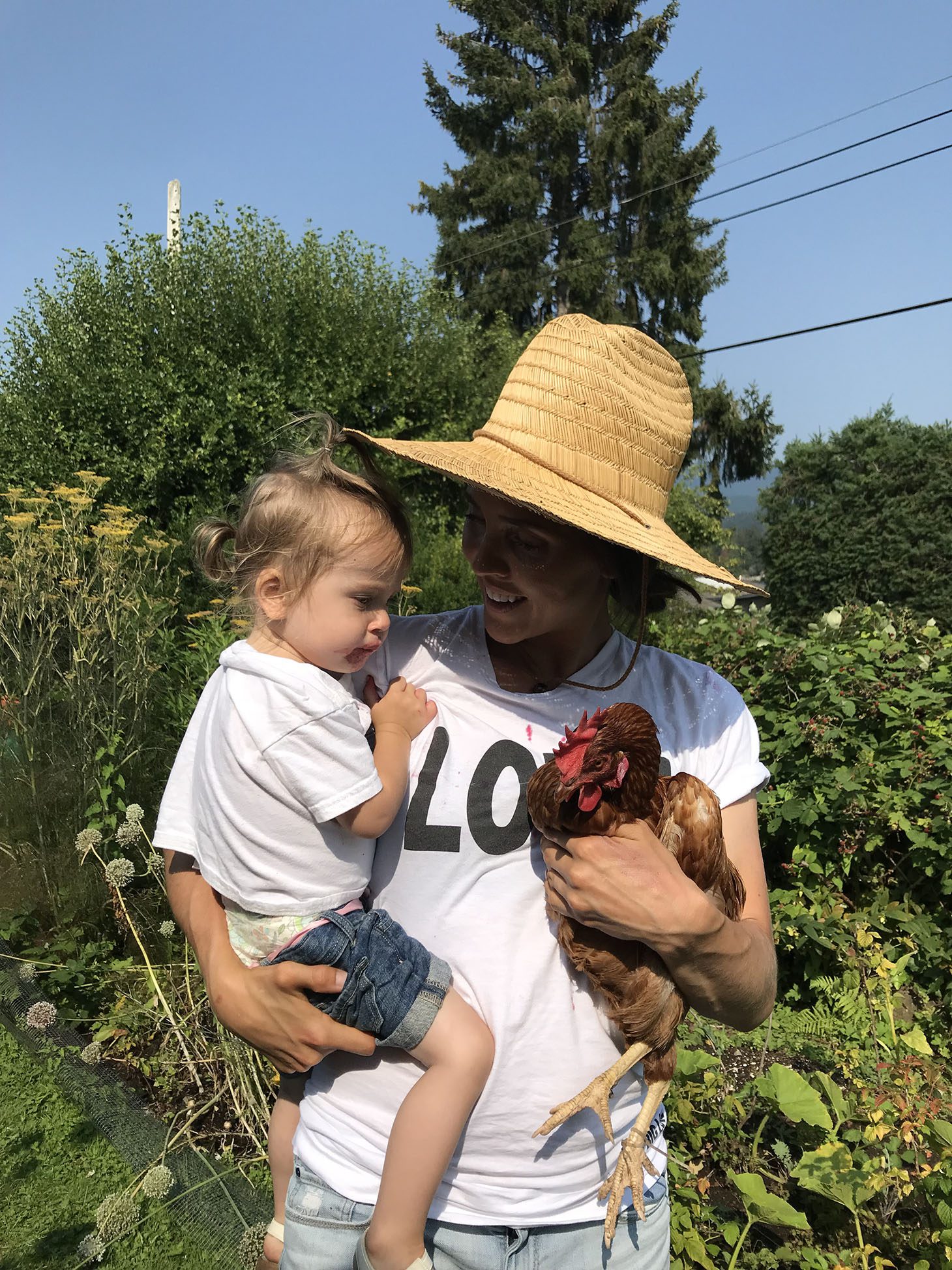 What are your best tips for raising vegan kids?

I’ve only just begun parenting (my daughter is two), so I’m constantly learning, but here are a few tips I know I would have appreciated if I was new to veganism at the beginning of my parenting journey: 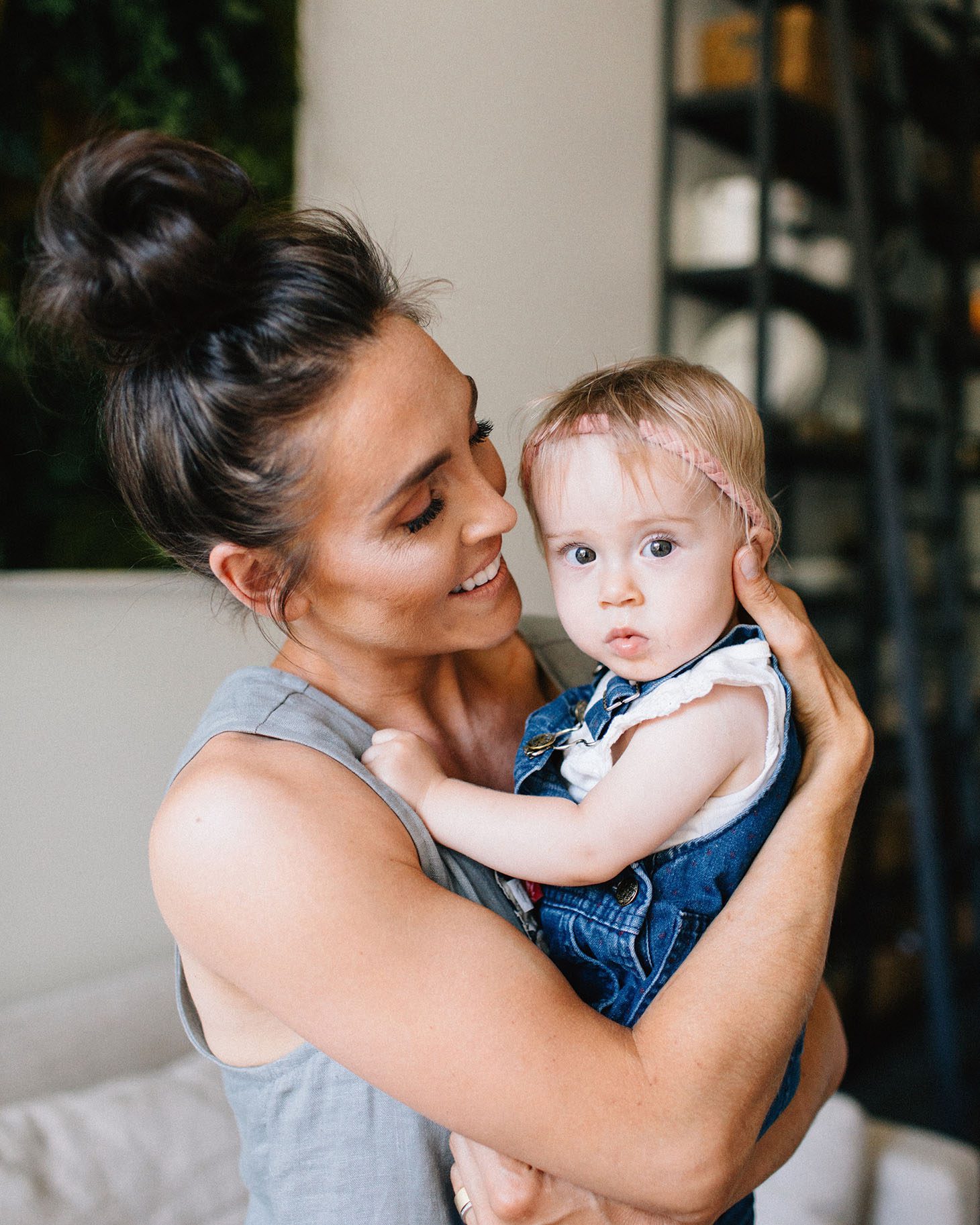 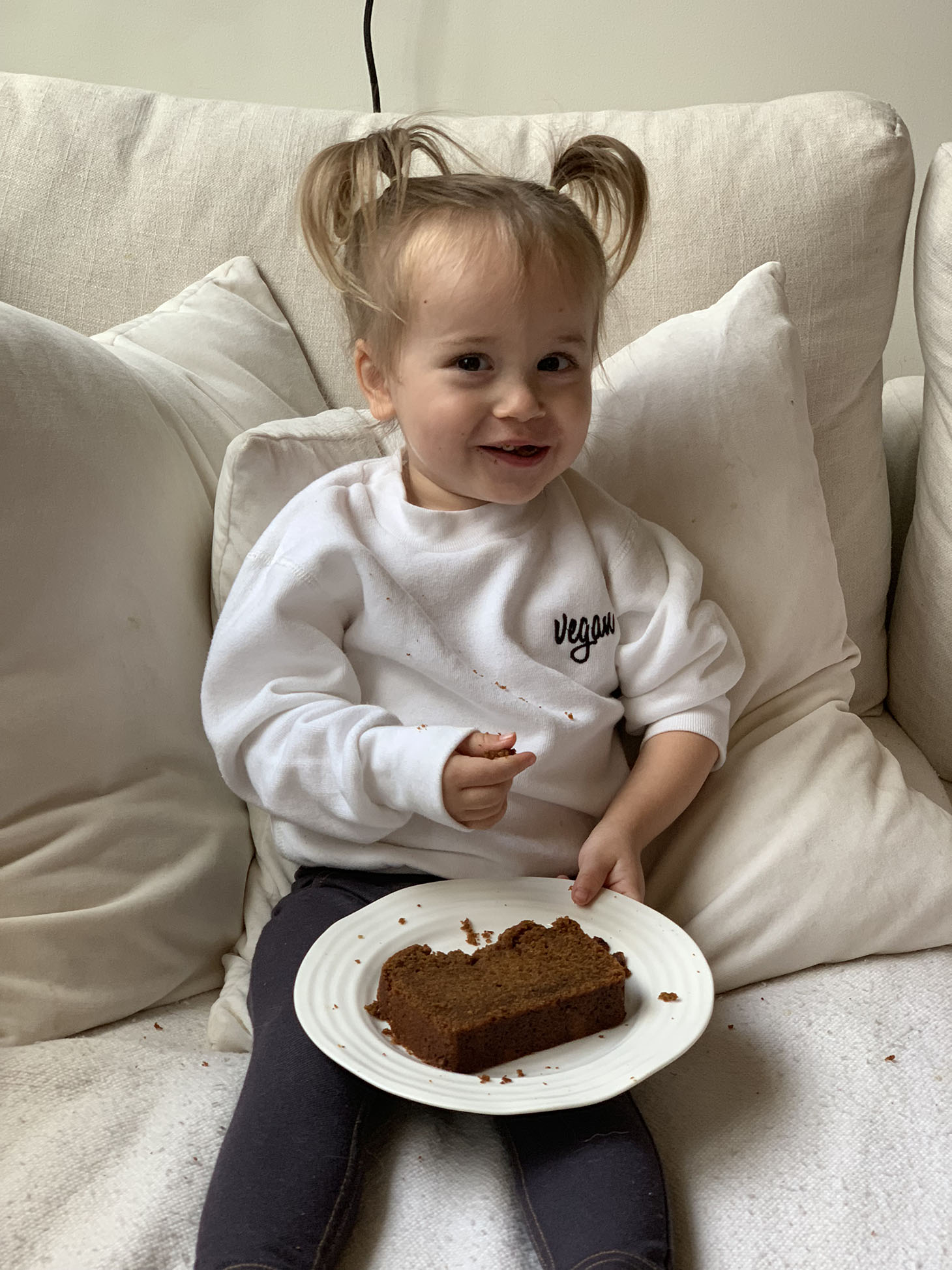 Why is milk and dairy so bad?

I never fully understood how bad the dairy industry is until I became a mother. Growing up, I just assumed that all cows produced milk naturally, all the time. In the movie Meet The Fockers, actor Robert De Niro states that anything with nipples can make milk. It dawned on me that this was true. Rats, zebras, bears and any other mammal with nipples produce milk…for their babies.

We, humans, are the only species who drink the milk of another species. In order for us to drink milk, humans must artificially inseminate cows (who go through nine months of pregnancy, just like we do), and then take their newborn babies away from them (most often within 24 hours after birth) so that we can drink the milk. This is the case at all dairy farms, including those that are small, family-owned or organic. After four to six years of pregnancies and births, when the mama cows’ bodies are spent, their reward is a trip to the slaughterhouse where they’re killed for hamburger meat. If you’re as shocked as I was to learn this, watch this great clip from the BBC about a dairy farmer who’s trying to make some positive changes on his ranch.

Cruelty aside, there are also countless health reasons our family avoids dairy. As a kid, my mom never let me drink milk when I had a cold because it increased my body’s mucus production. Essentially, all the hormones found in milk were growing the virus my body was fighting. (Even so-called “hormone-free” dairy has hormones, because milk naturally contains growth hormones to turn baby calves into thousand-pound animals.) Later in life, I realized that milk can do the same thing to other more serious viruses, too. Going off dairy also drastically reduced the adult acne I experienced in my late teens / early twenties. If you’d like to read more about milk, here is a great resource from Dr. Neal Barnard on some of the myths about dairy that marketers have perpetuated for decades. 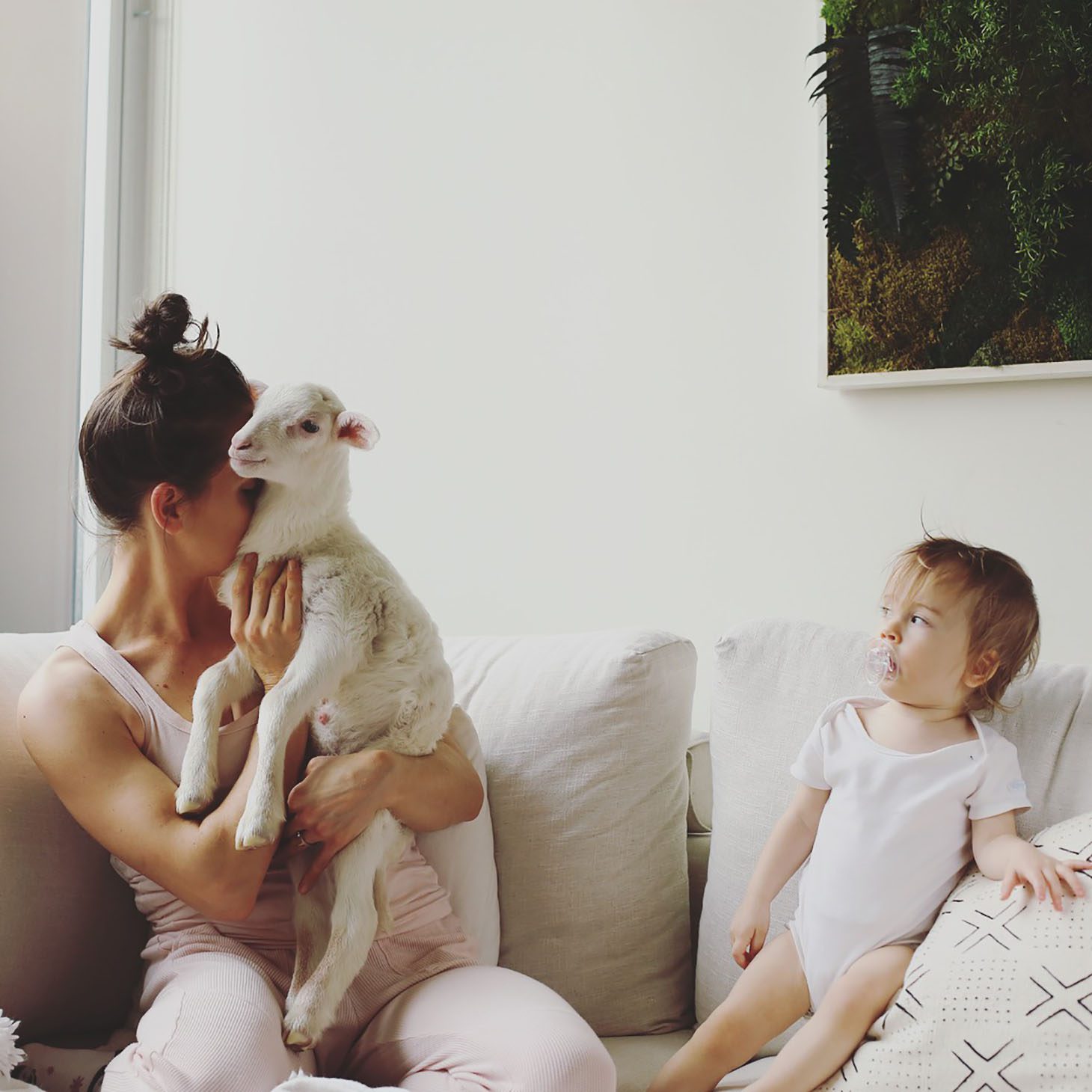 One of Jillian’s hardest tasks is finding quick, easy, and nutritious meal ideas that are kid-friendly. Where do you find your inspiration? What are your go to’s?

I’m not a big meal planner and I can’t say I refer to cookbooks much when it comes to cooking everyday family meals. My strategy is to stock my fridge and pantry with whole, plant-based ingredients and work with what I’ve got. I rely on some simple tricks to making foods delicious, like adding fat (vegan butter, avocado, tahini, oil), acid (lemon, lime, vinegar) and sea salt.

The standard ‘building blocks’ to our family dinners are:

Also, don’t feel like you’re always having to come up with something new and exciting. Stick to what you and your kid like. We have steamed broccoli almost every night! Same goes for quinoa, tofu, and avocado. Here are more ideas for what to feed your vegan baby. 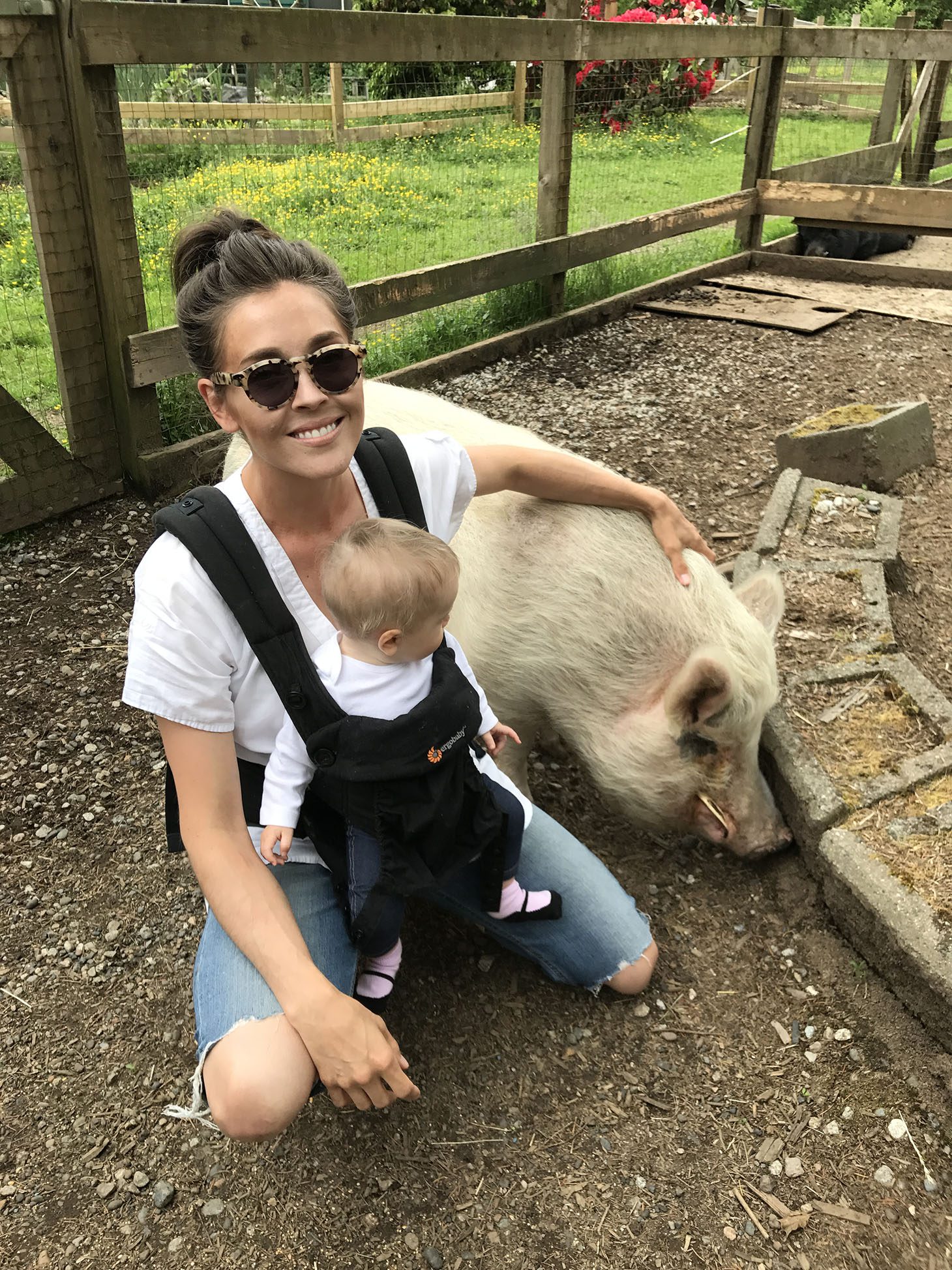 I hope that helps everyone! If you have any questions for Erin feel free to share them in the comments below and we will try to get them answered for you! If there are enough, maybe we’ll do a follow up Q&A!!