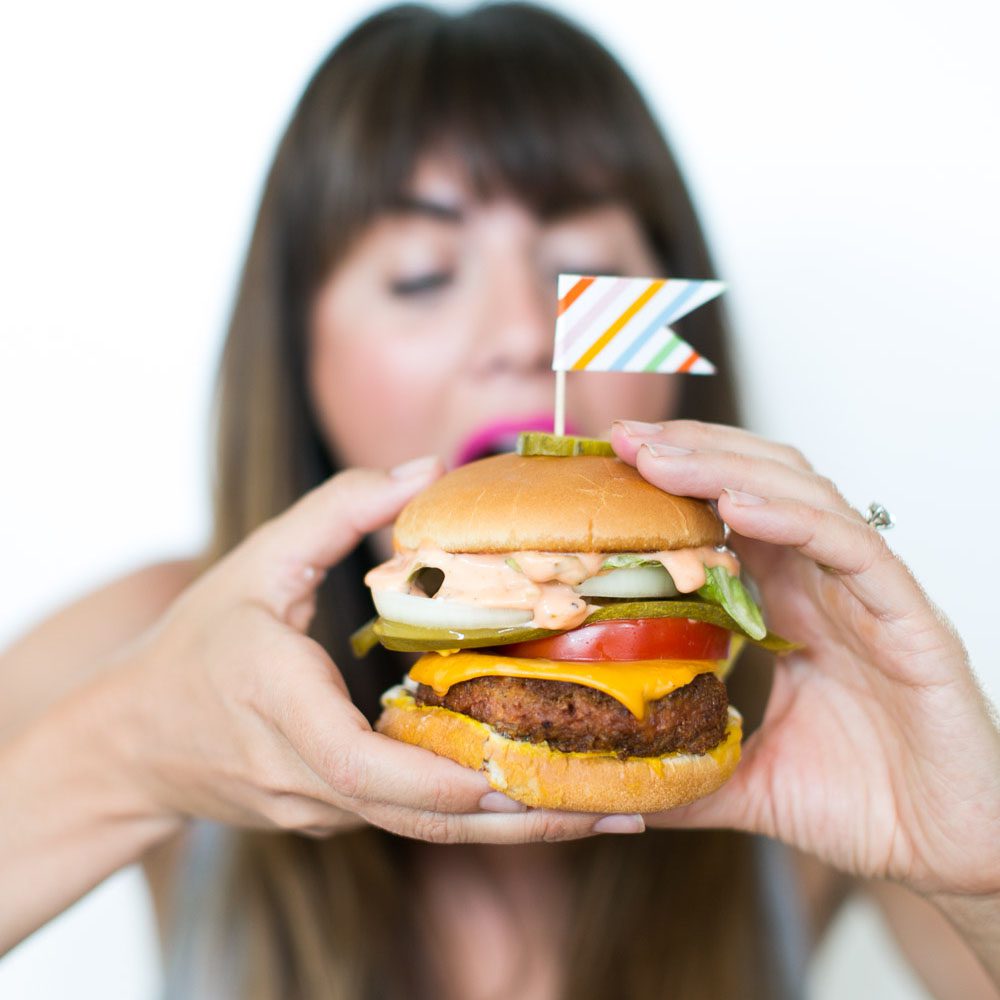 What would summer be without burgers?! I mean c’mon, there’s nothing like enjoying a burger and a brewski on a hot summer day, am I right?! Right!!! However, one struggle that I’ve found being plant-based is finding a veggie burger that is super indulgent AND also tastes great! So we decided to taste test 5 different vegan patties to see which one snagged the title of “Team Jilly’s Best Summer 2017 Veggie Burger” … yeah, it’s a long title but it’s well deserved! LOL! 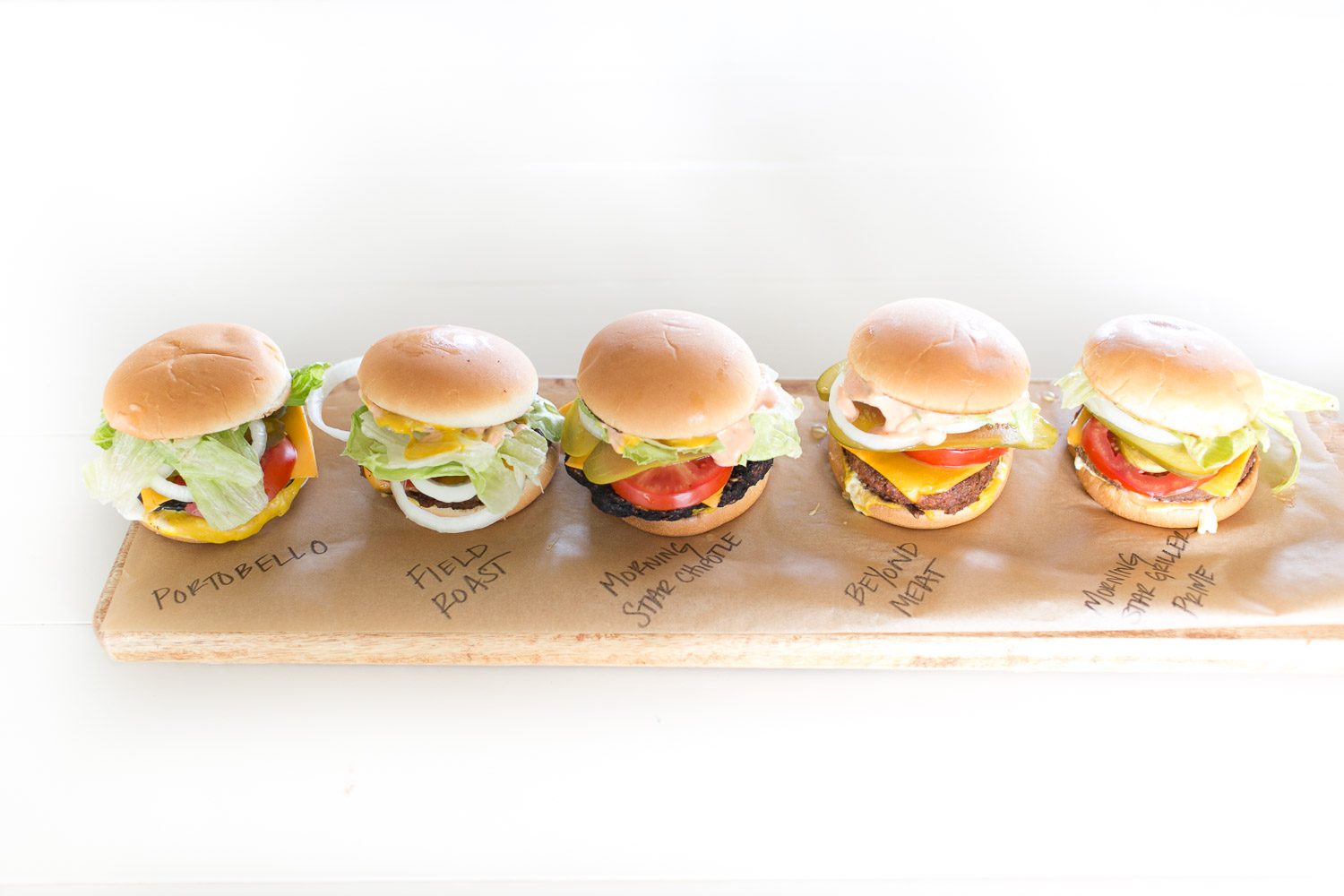 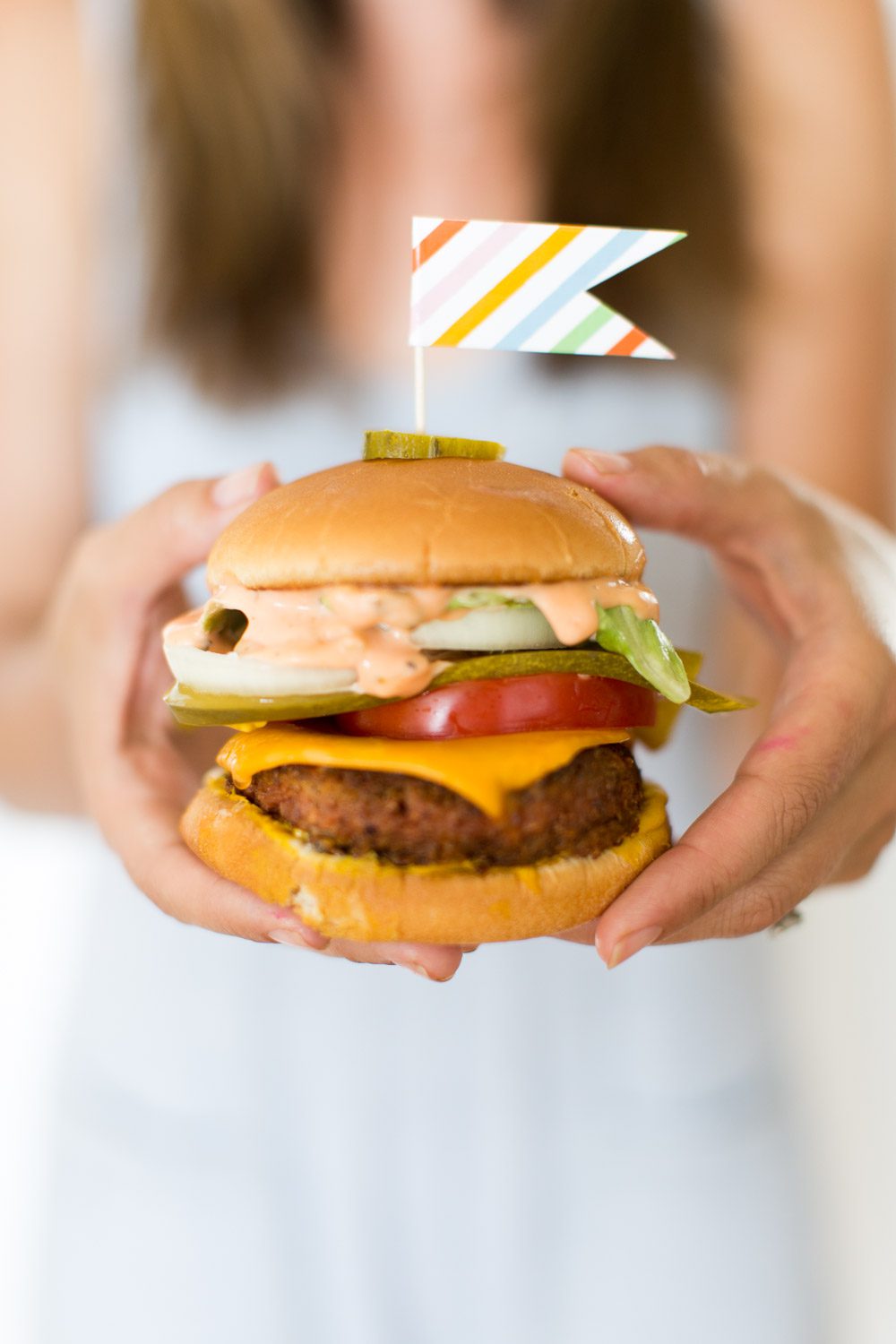 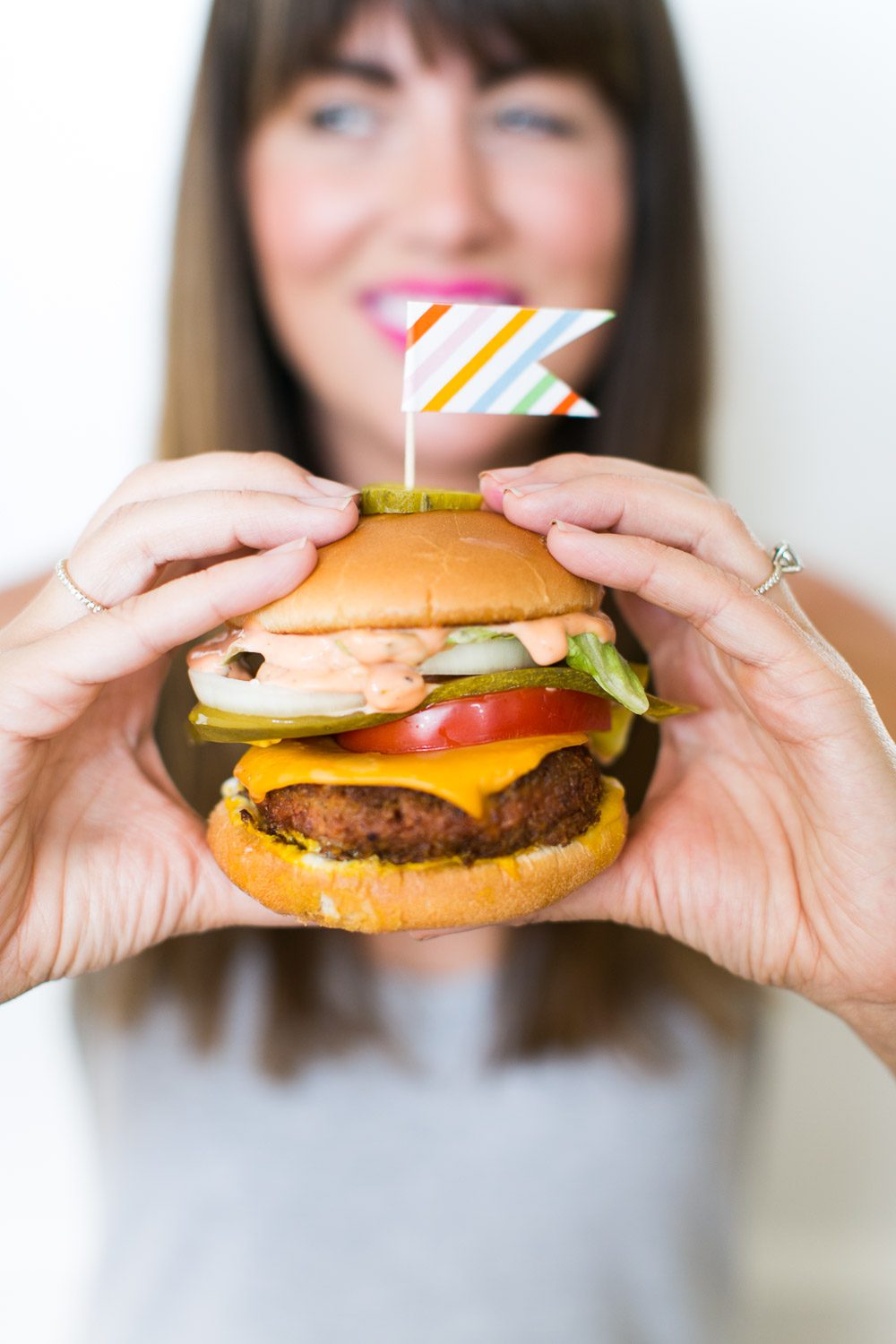 Before we dig into the results, I should mention that if you’re going to be eating a burger … most burgers aren’t healthy, as we all know … and if it’s vegan they TRY to make it healthy, but you need the butter and the special sauce and the white bun to make it TASTE good … you can’t do the vegan burger with a brown bun and no sauces and expect it to taste like a real burger because it just won’t!

Also, I would suggest FRYING these burgers in lots of vegan butter and not to barbeque them! Originally I thought I was going to write about the best vegan barbequed burger but the more research I did the more I realized the best burgers were all fried!! For the meat lovers out there, all of the juicy A&W burgers are grilled and not barbequed! I also like to add a touch of salt to the burgers as well!

We made sure to dress all of these burgers the exact same so the taste test was true, we used the following on our burgers:

Stir together and serve with your favourite vegan burger! 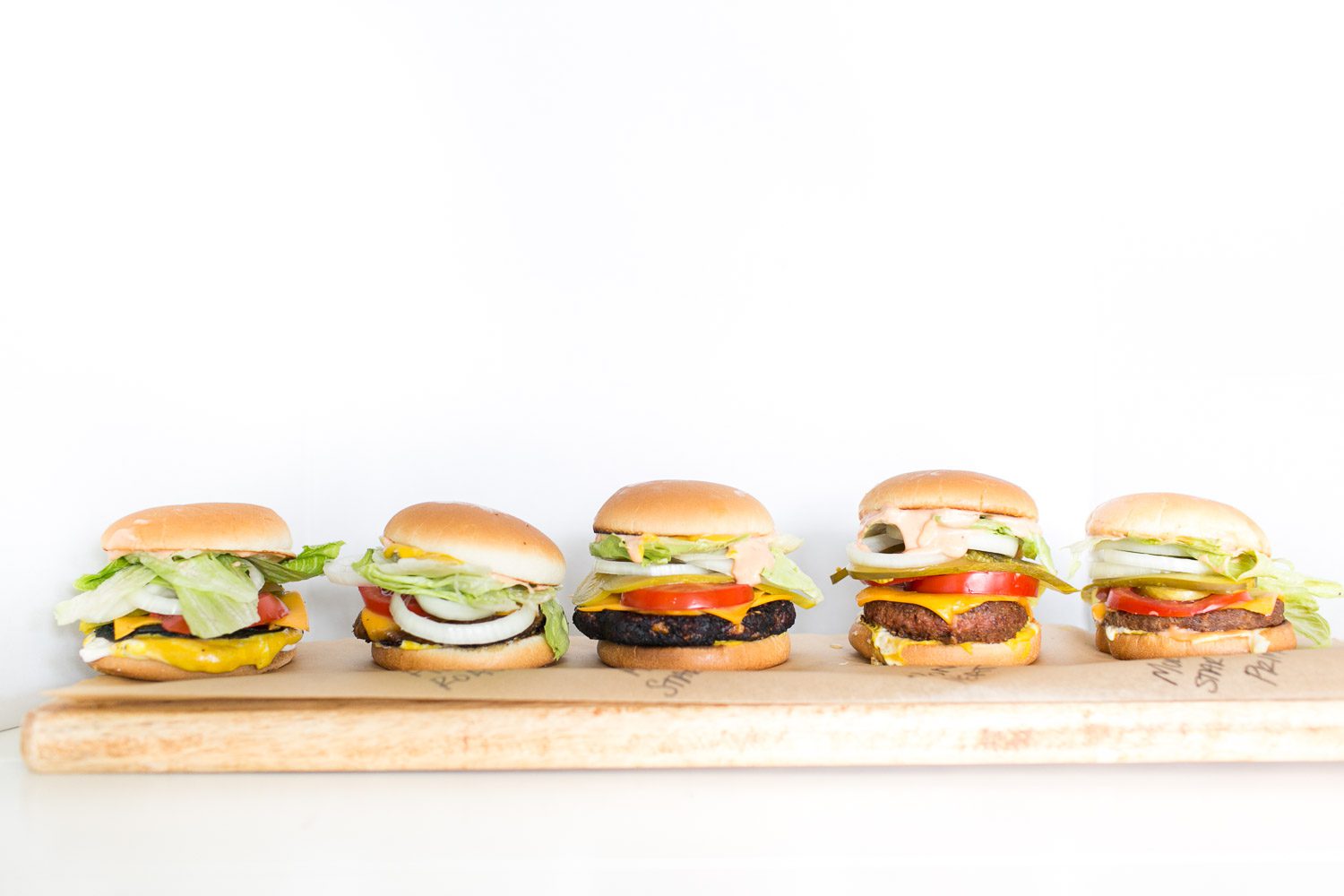 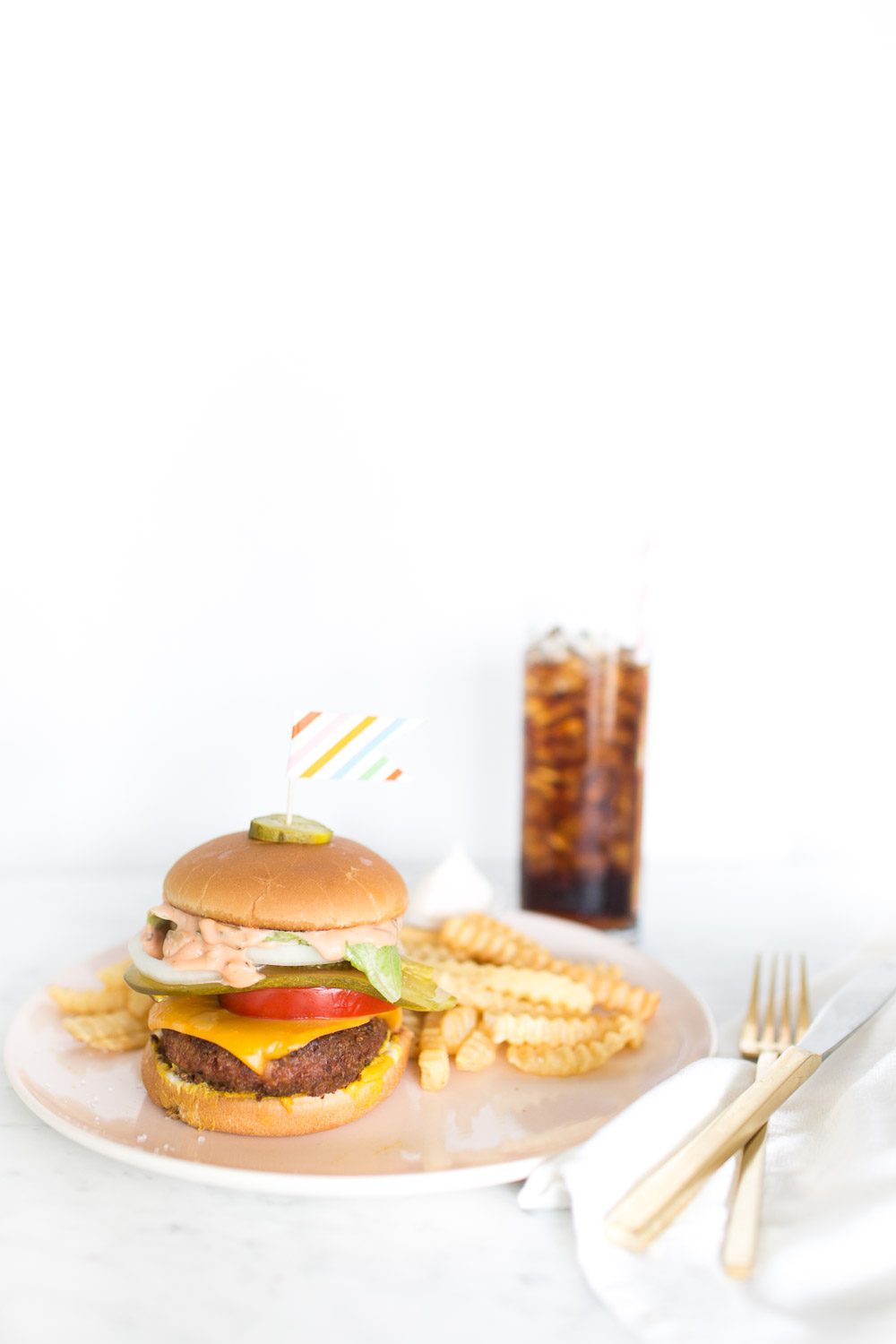 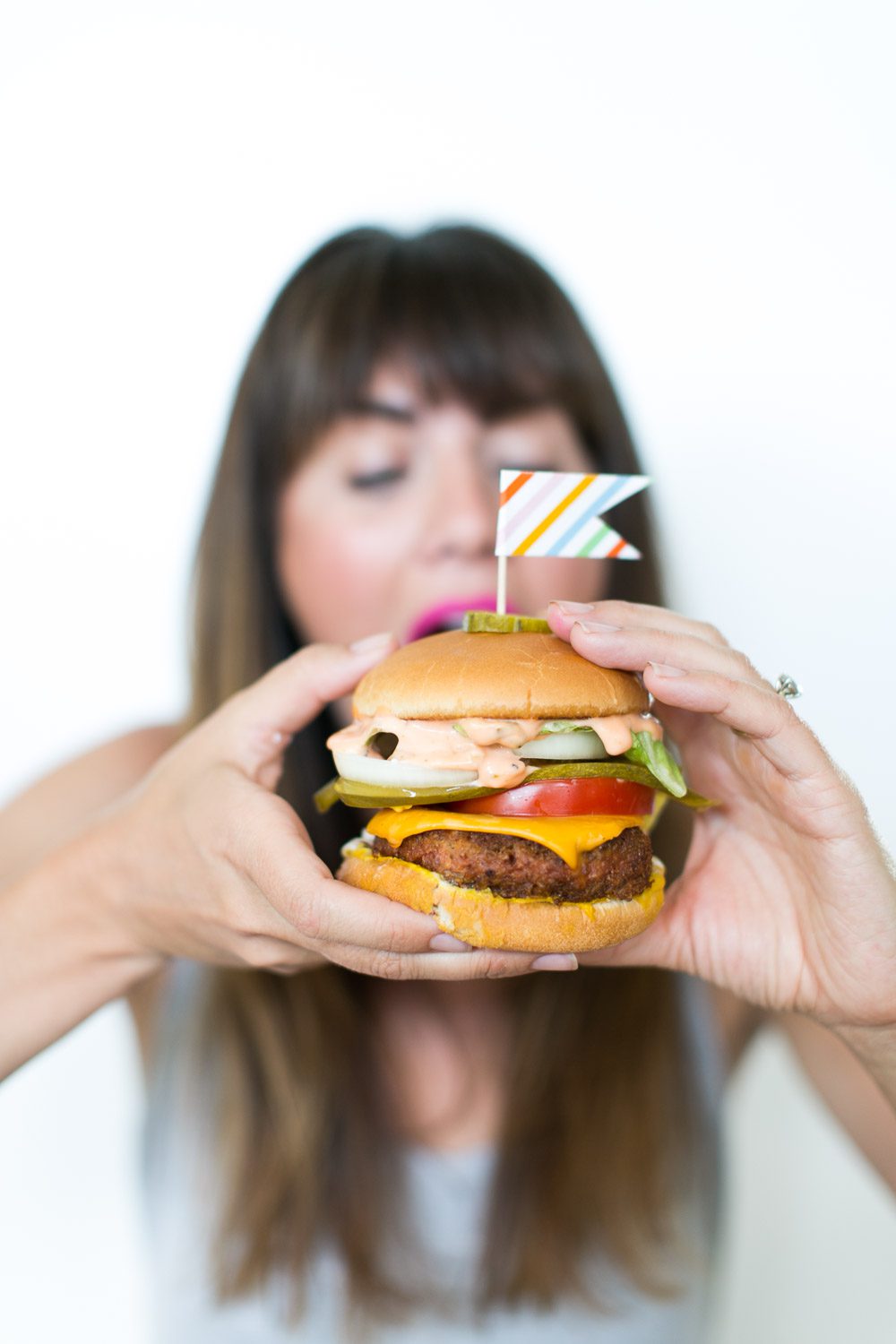 One of the many pros to eating vegan burgers is that you don’t have to worry about cooking them long enough since they’re all plant based!

Ok, let’s get right into our thoughts on each veggie burger!

1. Beyond Meats “Beyond Burger”: This smells like meat and looks like meat! The patties are quite thick so I had to keep flipping it and I found that they actually stick to the pan. The texture and taste literally tastes like meat …. it actually weirded me out a bit!! It has the right saltiness and reminds me of a burger you would get at a diner. The con, however, is you can only purchase these in the States and I think they were a bit expensive. 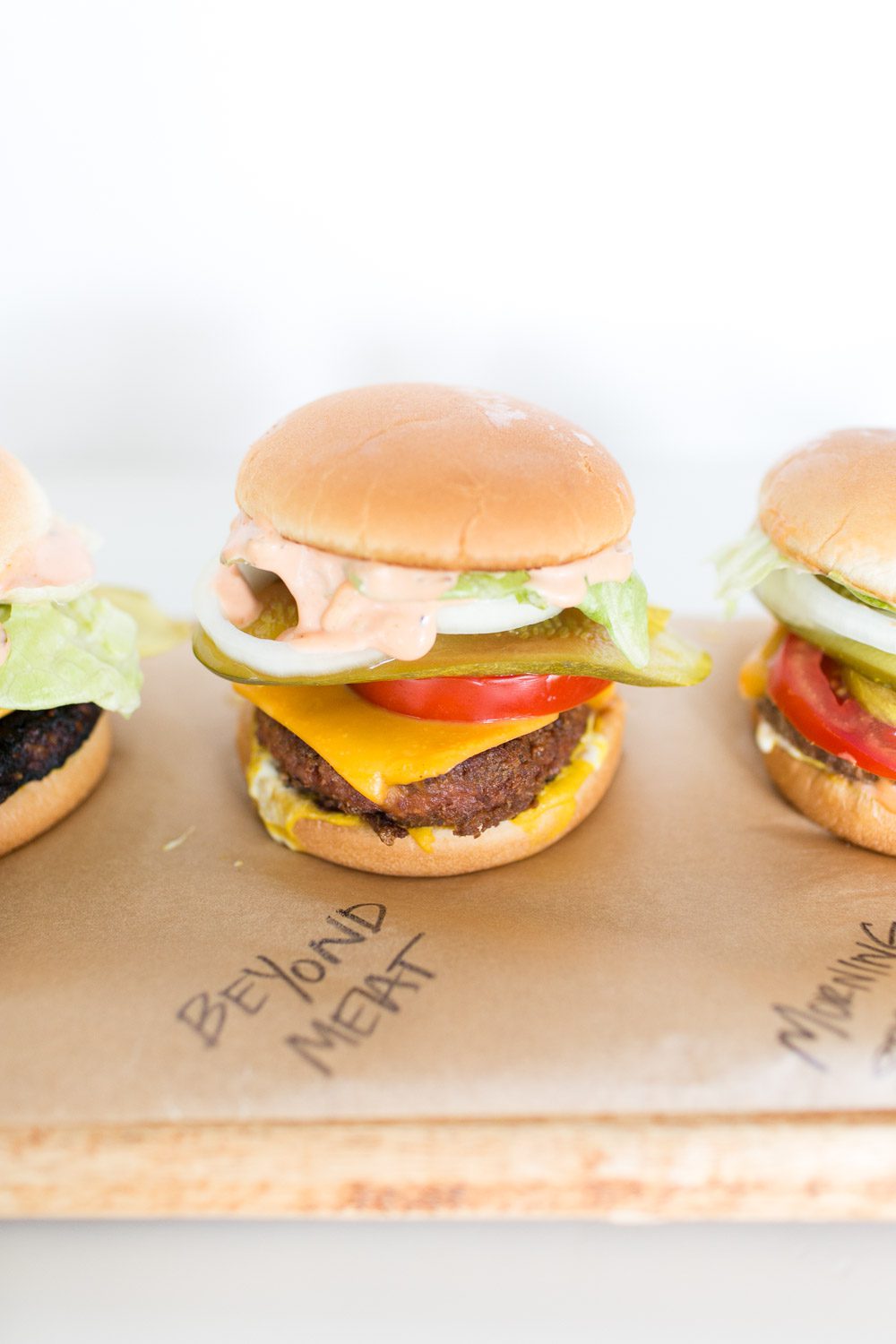 2. Morning Star’s “Grillers Prime”: You can get them almost anywhere!! I got mine from Target in the states when I was there and they’re reasonably priced! These burgers actually tasted like a fast food hamburger and the patties were really thin which I liked! The only downfall is the fact that they have egg whites in them! 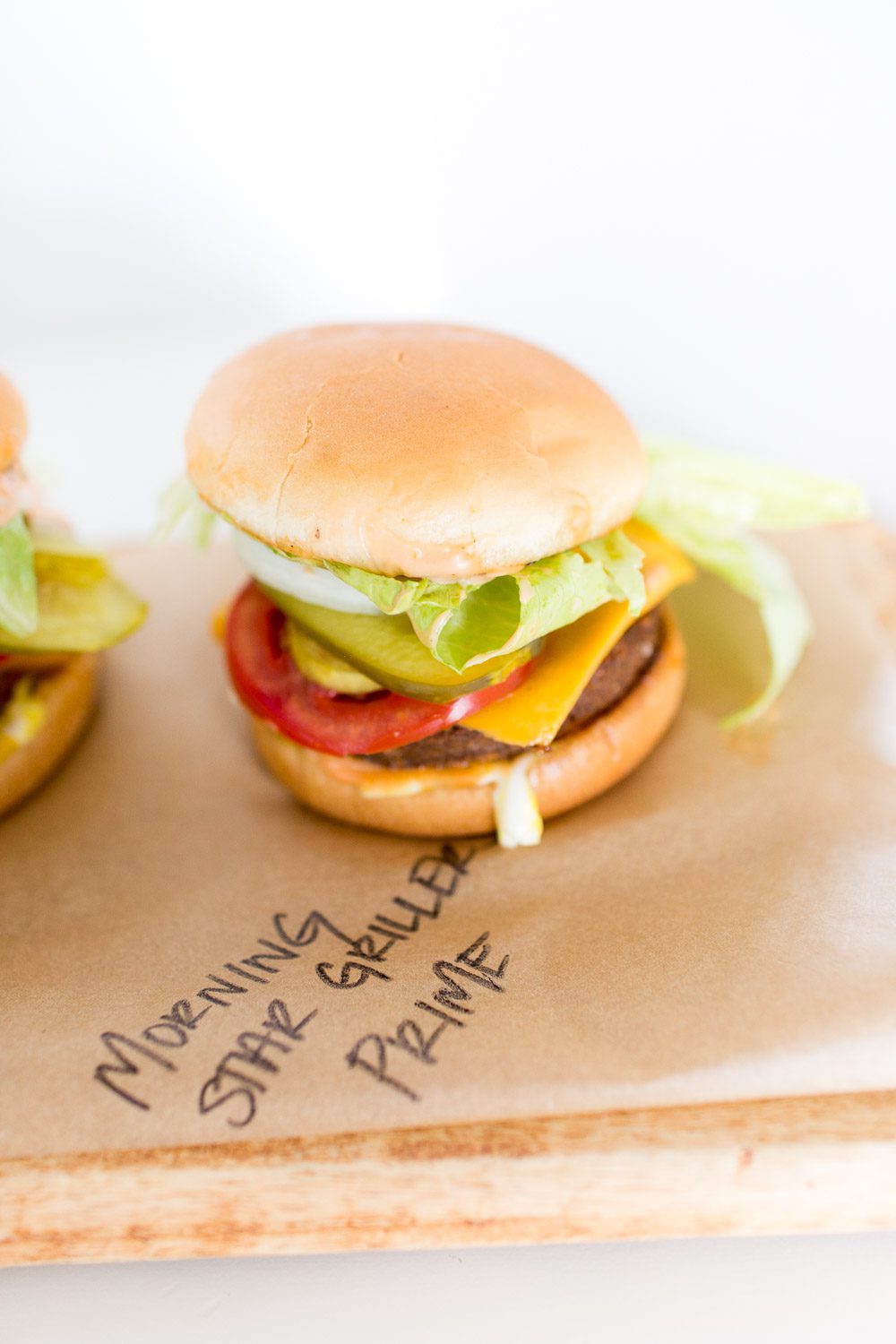 3. Morning Star’s “Spicy Black Bean Chipotle”: I purchased these from Costco! I think the size of these patties would appeal to most men, they’re pretty big and they already have a smoky flavour to them! They’re also pretty firm and would hold up well on the BBQ! They TASTE  vegetarian but the black bean is over powering and the texture is quite beany … is that a word? Beany?? Lol! It is now!! 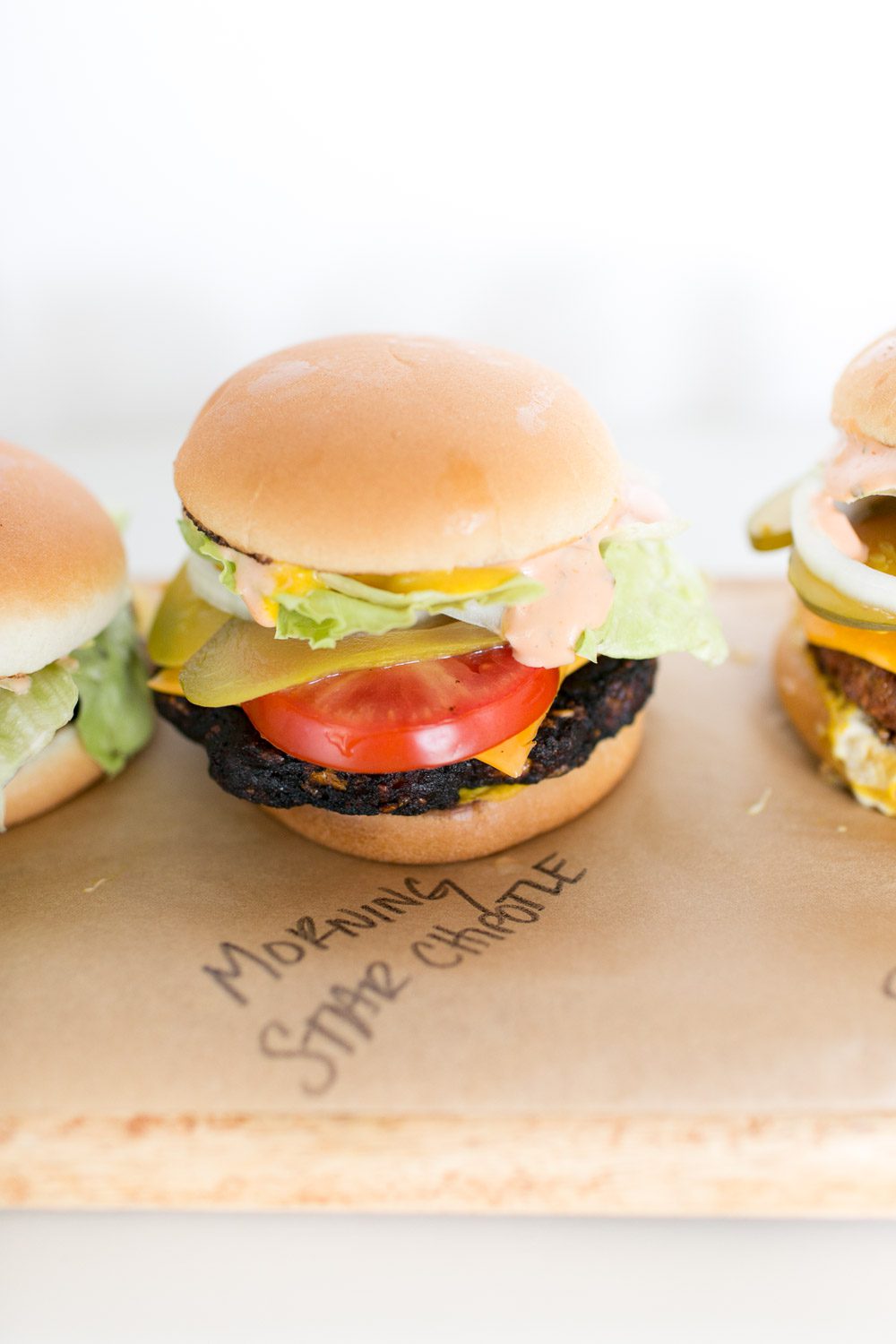 4. Field Roast’s “Fieldburger”: This burger smells like beef and it seems to be more “bubbly” when I was frying it so I think it has more fat? To be honest … I felt the flavour was totally off on this one and I would give it a 1/10! 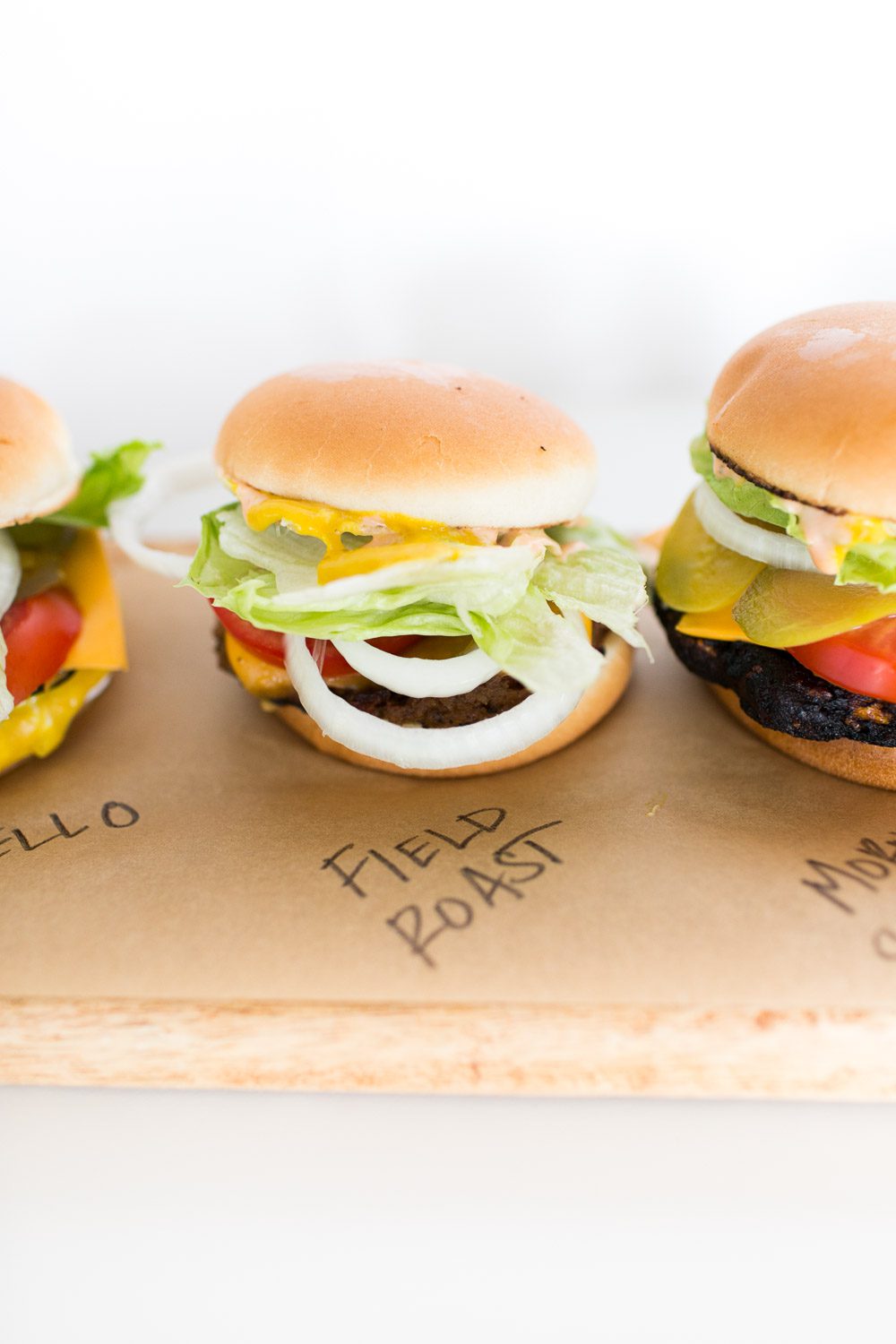 5. Portobello Burger: I’d give this a solid 2/10 … LOL!! If I want to have a burger I’m definitely not going to be craving a mushroom … just sayin! LOL! 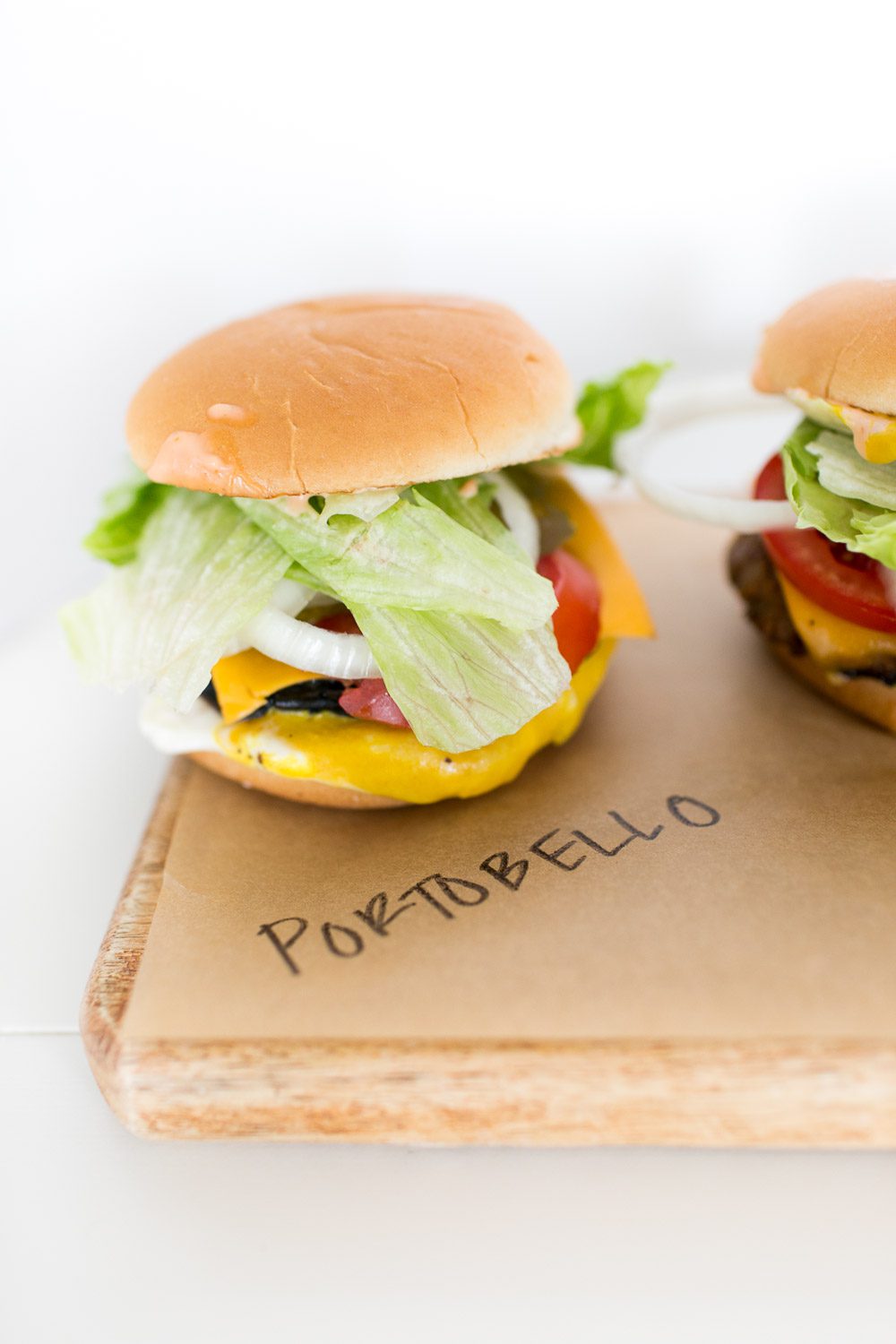 Soooo out of the 5 burgers we taste tested we have a winner and a very close runner up … drum roll, please …

The winner is … Morning Star’s “Grillers Prime“ (no, this isn’t even a sponsored post! LOL!! You’re welcome, Morning Star!!). I thought this was the BEST burger because it really did remind me of a burger you would get at a fast good restaurant, it tasted so indulgent and I loved how thin it was!! The runner up was the Beyond Meats “Beyond Burger” this burger is totally vegan but it reminded me too much of meat and I found it to be too thick! I think most guys would love this burger though!! 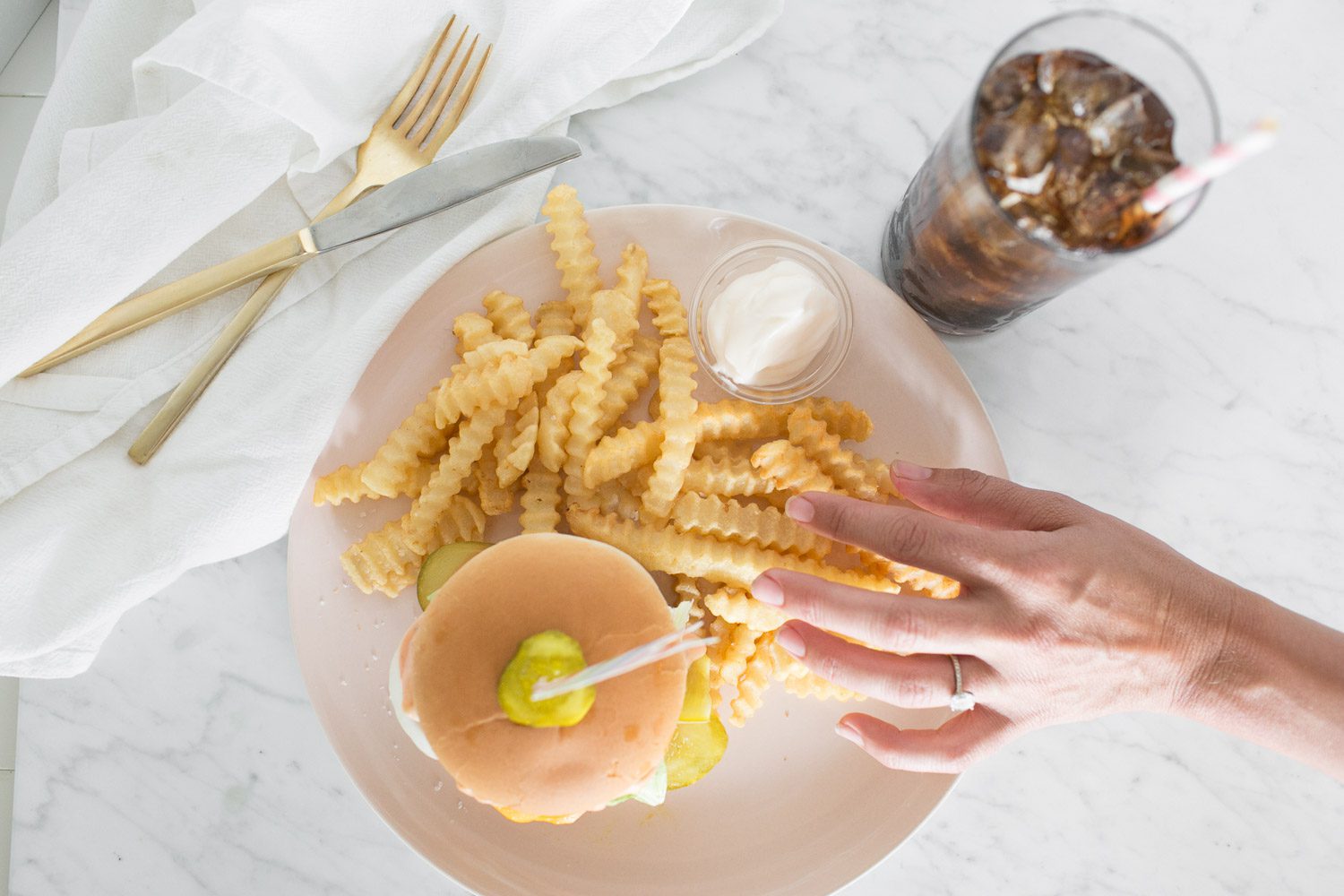 Have you tried any of these burgers?? If so, what did you think of them? Or, have you tried one that we didn’t test above and that you LOVE?? If so, let us know what one it is below!! 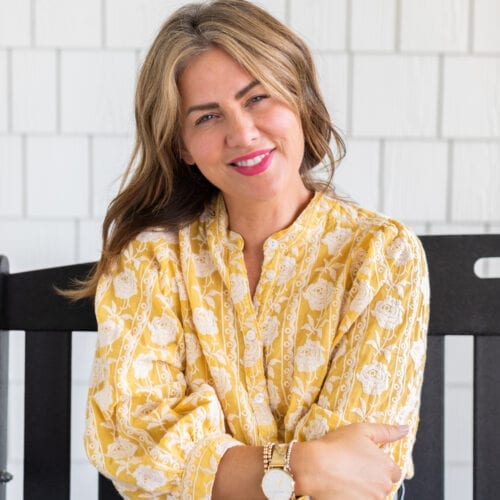 8 Farm-Inspired Outfits You Need to Copy This Summer! 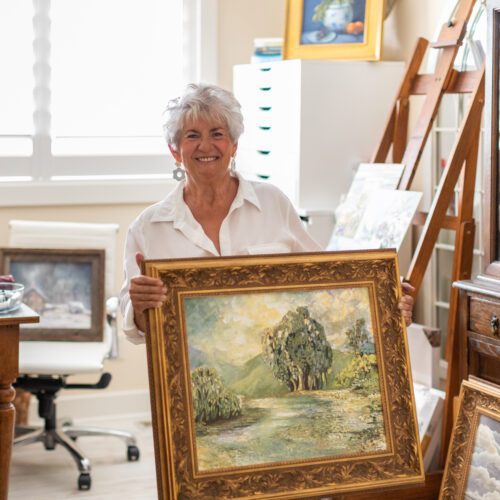 How Peggy Got Back into Painting!