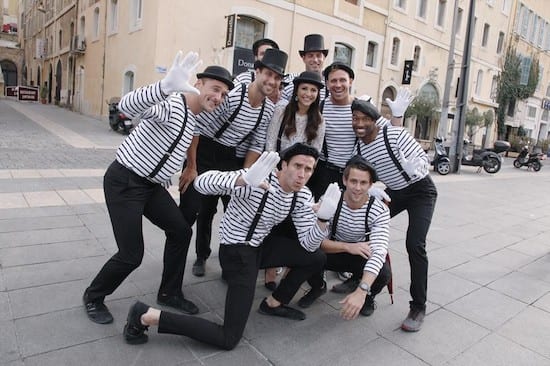 Oui … Oui… OUI!!!!!! I WAS INSANELY JELLY of tonights location shoot!!! I mean… Spain and Hawaii and New Zealand (my seasons) were ok and all (hehhee) but the south of FRAAAANCE!!!! MON DIEU!!!

The first one-on-one date with Josh was supppperrr cute. He is cute! Their boat ride, picnic and dinner at the palace were soooo picturesque and perfect, right out of a fairy tale. BUT, I think she’s totally right….there’s clearly some questions that need to be asked and it’s hard to tell if they really click! Still VERY skeptical of his intentions and where there relationship is going…but looking forward to next week to see what this lie detector thing is all about!!! Any guesses??????

I absolutely CAN’T stand Andrew, and I can’t believe he’s still there this week!!!! He’s the most immature out of the ENTIRE group and he’s completely oblivious to anything he says or does. The remaining guys clearly don’t get along with him….he’s proven that he’s arrogant, defensive, and doesn’t realize the impact of his actions! GROOOOOWWW UP!!!! And when Andi confronted him about how things were going among the guys, he made it pretty obvious that he didn’t want to be there, and the process meant NOTHING to him – and neither did Andi for that matter…. now having said that? There always has to be that ONE token guy … so i guess keeping him keeps our tickers thumping!

Seeing Marquel so upset broke my heart – he seems like such a sweet, real, genuine guy that takes this journey seriously. It was hard to watch him explain how he feels he’s viewed by everyone, and I’m very sad to see him go 🙁

The group date was a DISASTER!!!! So much drama! I really didn’t like the fact that Nick decided NOT to participate or even TRY the miming thing…just live in the moment and be grateful that you are in the south of France! STAAAAHHHHP SULKING lol. Based on the way he acts when he doesn’t receive a rose, I think he seems pretty crazy…like he would be a crazy possessive type boyfriend that CONSTANTLY needs attention…but I guess we will soon find out!!!

To be honest, Andi’s date with Brian was BORING and hard to watch. The movie setting was super cute and the idea of shopping for dinner at a French market and cooking together is MY KINDA date! But once they got to the kitchen….the vibes were weird and awkward and…I don’t even know how to put it into words! He didn’t TRY to make her feel comfortable or special….I think he was just super timid and embarrassed of his cooking skills, but he should have been honest and just made fun of himself instead!

I can totally understand why Andi didn’t want to go through with a cocktail hour this week. I mean….there were parts of her dates this week that were pretty awkward and disastrous, wouldn’t you say?!?! There was BOUND to be something that would happen during that cocktail hour that would get her upset. WAAYYYY TOO MUCH tension floating around to even give it a chance. I do agree with her choices of sending Patrick and Andrew home, but I honestly feel like Marquel had a lot more to show, a lot more to give, and I would have given him one more chance to see what he’s all about.

What are your thoughts?!?! Do you think Andi has a good chance at falling for one of the remaining guys???? Let’s hear your predictions!

Tagged in:
bachelor, recap, the bachelorette